Michelle Obama Speech For USA Olympians On Track To Gold

It’s something of a tradition for America’s first family…giving a rousing speech to American athletes before a global sporting event. Two years ago it was the turn of President Obama. His 2010 World Cup speech wished the USA soccer team well before their flight to the FIFA World Cup in South Africa. And today, with the Olympic games officially underway and with only hours to go before the opening ceremony it was time for a Michelle Obama speech. 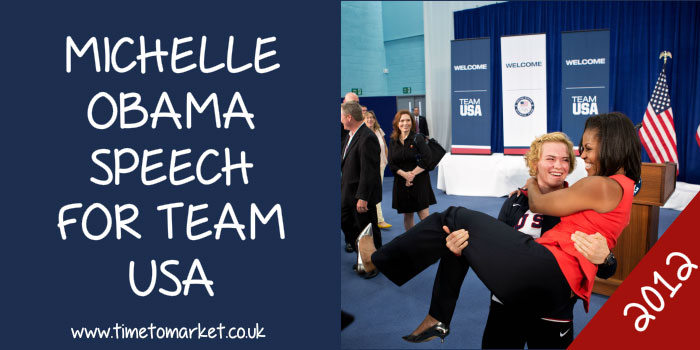 The President had to wish the FIFA World Cup 2010 soccer team “God speed” because he wasn’t due to travel to South Africa. That honour went to Bill Clinton and Vice President Joe Biden.

But Michelle Obama has landed the role of US delegation lead for the Olympics. In that capacity she’ll be at many of the key London 2012 Olympic Games events in the coming days.

Her speech to the USA team at the University of East London, where the USA athletes have a training facility, was certainly well-received. Her approach to public speaking doesn’t extend to the rhetorical high ground of her husband. But what she lacks in that discipline she more than makes up with warmth and charm.

She noted the Olympian virtues with her final remarks:

Try to have fun. Try to breathe a little bit. But also win, right? In the end winning is good.

Winning gold might not be everything to everyone but it’s a dead heat with anything else.

You can, of course, practise your own public speaking techniques with specialist coaching. A one day coaching session will give you the skills and confidence for any public speaking event. You can choose a coaching session at your offices, or one of our off-site training centres. And, because we have more than 40 training venues, you are never that far from your nearest. Please don’t hesitate to get in touch for more details.