Ban On Speech Reading In House of Representatives 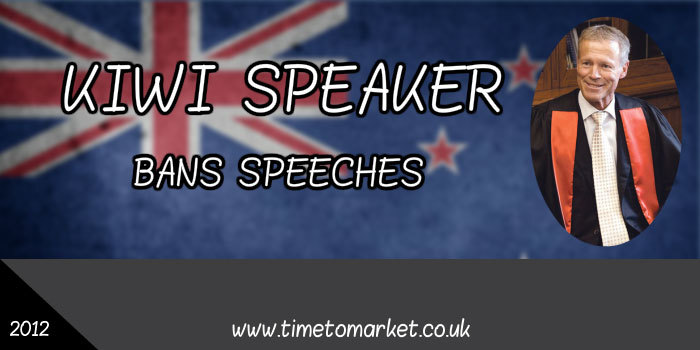 It’s said that one of Britain’s finest orators, Winston Churchill, vowed never to speak without speaker notes after he lost his way during a speech to trades unionists early in his political career. Never again would he venture a speech without notes.

So the case of Alexander Lockwood Smith is curious. He’s the Speaker of the New Zealand House of Representatives and nothing gets him more worked up than politicians giving speeches, in his chamber, with notes. It’s his view that the debating of issues is made more lively and dynamic without politicians depending on prepared material. Speaking from the heart is to be preferred by Speaker Lockwood Smith.

That’s some view. In a recent agreement, that he concluded with the political parties in the chamber, all sides agreed not to read prepared speeches and not to read from notes.

It was the matter of reading from notes that got the Green Party MP Kennedy Graham somewhat vexed. He dared to challenge the Speaker’s understanding of the agreement. In his view Members of Parliament had agreed not to read speeches. But they kept the right to read from notes.

“Wrong,” said Speaker Lockwood Smith. Apparently the agreement bars MPs from reading speeches and speaking from notes…unless they are new, inexperienced MPs or they are speaking on highly technical subjects.

And then to prove the point, he retrieved his notes of the meeting that agreed this stand…and he read them to his audience.

The irony wasn’t lost on Speaker Lockwood Smith who noted, “I could not do it from memory.” Quite so.

It’s not an approach to public speaking that we would endorse. But undoubtedly short and sharp unprepared speeches add to the adversarial nature of the parliamentary process.

You can discover plenty of public speaking tips with our regular series of tips and podcasts. And, of course, when you are ready to boost your public speaking skills even further, then please don’t hesitate to get in touch.