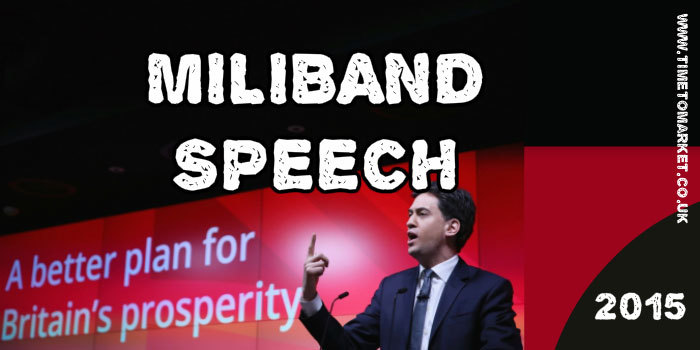 The Labour party leader, Ed Miliband, chose a speech at Bloomberg’s, the business data specialists, to kick start the campaign with a manifesto for business.

And what a manifesto it was.

Our plan is based on the idea that Britain can only succeed when all our businesses have the chance to succeed.

The multinational company and the family firm.

The FTSE 100 and the start-up insurgent.

Playing by the rules.

And paying the taxes that support our public services.

Our plan is to work with all our businesses.

His public speaking style in this Bloomberg’s speech is heavily list-driven. This particular list was followed  by others:

There is no future for Britain as a how-low-can-you-go economy.

Productivity is the key to the country we wish to be.

With opportunity for all.

Our plan for business seeks to close our productivity gap.

It’s as if his very capable speech writer has chosen one characteristic style for his Miliband speech and then stuck with it. That’s not a bad idea, but it’s one that might have been improved with some variety.

Some Rhetorical Flourish In Miliband Speech

Yes, we heard some other rhetorical devices beyond lists.

And it’s bad for Britain.

Well, perhaps a list with that all-important repetition. Not bad.

And to the close we came…exhausted. It was a big finish as you’d expect from a Miliband speech kick-starting the election campaign.

My case to you over the course of this general election campaign is that Britain can do so much better for you and your family.

And this is a country we can only build together.

A partnership for a purpose between government and business.

Supporting you to create long-lasting prosperity that reaches right across our society – from your firms to everybody’s front door.

These are our goals.

This is our plan.

Let’s build a better country together.

Ah well. So, with six weeks to go there’s plenty of time for some more speech writing variety in an Ed Miliband speech. But if you can’t wait, why don’t you consider a one to one public speaking coaching session with Time to Market. You can choose a coaching session at your own offices or, at one of our 40 plus training centres. Please don’t hesitate to call us for more details.