After dinner speaking is an art form. An art form that deserves special attention. Sometimes the speeches work and sometimes…they don’t. There are speakers who really perform and there are those who…don’t. So this President Obama Gridiron speech in Washington D.C. caught our attention. 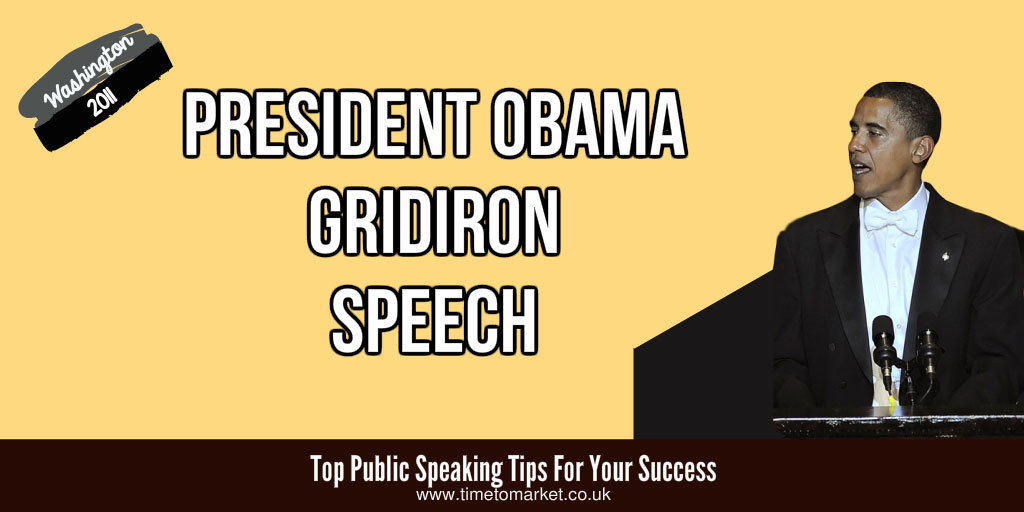 Humour In The After-Dinner Speech

So, we had a good example this week.

President Obama, usually a very clinical and technical orator put in a rarefied performance this week as an after dinner speaker.

Now, being the President you’d expect him to have the best gag writers on his side. And that’s true. His gags were pretty funny.

But the best gag also needs precision timing. A good line delivered with conviction. A pause. And a punchline. The President was no stranger to this technique when he and 600 guests attended the 126th Gridiron dinner a stone’s throw from the White House in Washington D.C.

All US Presidents before him, since Grover Cleveland, have attended a Gridiron dinner hosted by the exclusive media club. The club meets every Spring time to eat, drink and roast each other in speeches, songs and skits. Their appropriate motto is “singe but don’t burn.”

And singe they did. Politicians were the butt of most of the jokes, though journalists and commentators featured in a few. No political hue was immune from being a target. In fact self-deprecating humour was probably the best way to get through the evening for many.

And the President? A well-prepared short Obama Gridiron speech for the assembled guests marked his very first attendance at the Gridiron dinner. He had some good jokes at himself, close colleagues and Rahm Emanuel. Because you can always make humour work in after-dinner speaking or even use humour in the conference speech.

Theme Of This Obama Gridiron Speech

His best moment, however, was when he asked the Marine band to stop playing “Hail to the chief” and strike up the Bruce Springsteen tune, “Born in the USA.” A very subtle knock at those who question his USA birthright!

The theme of his USA birth featured several times in his speech:

The American people are going to have some tough questions for Tim (Pawlenty).

Specifically, ‘Who are you and where do you come from?'”

“Which is OK. Two years into my presidency and I’m still getting those questions.”

All very good for this first President Obama Gridiron speech. However, with the First Lady away at Camp David, it was some surprise that the President’s evening finished at 1030 pm…a departure from previous events that carried on the entertainment to the early hours.

The cares of office…

You too can always aim to work with the best material you can. So, our series of public speaking tips should help you with your all-important speeches. And with more than 100 top tips for speakers and presenters, there really is something here for everyone. Plus, when you are ready to give your public speaking skills a further boost, then why not consider some training. Because a well-timed training session will always do your confidence a power of good. So, when the time is right, please don’t hesitate to get in touch.