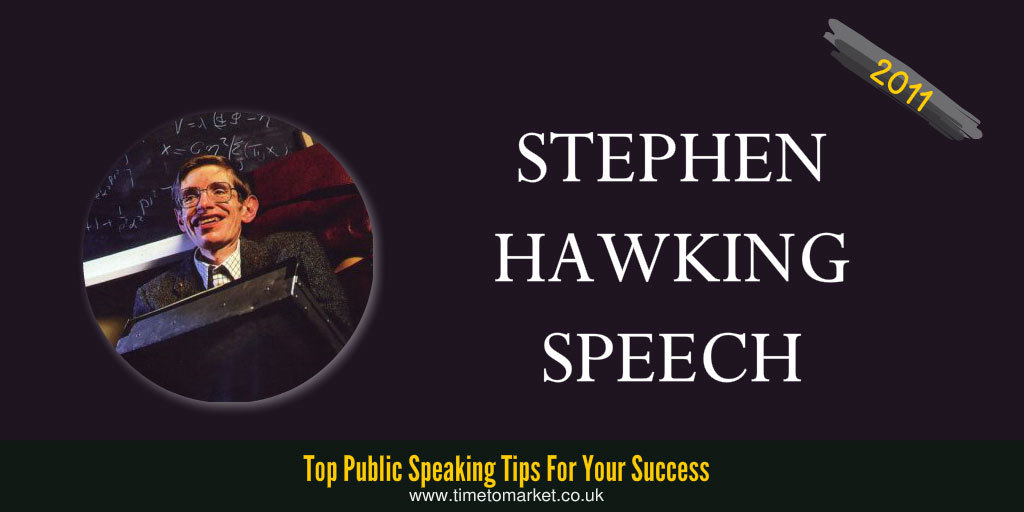 Just prior to his recent speech at the Texas A&M University in College Station, Texas he noted how his one hour speech had taken him weeks to type out.

The professor suffers from amyotrophic lateral sclerosis, sometimes known as Lou Gehrig’s disease. Such is the nature of the disease that Professor Hawking’s mind continues to work at extraordinary levels whilst his body is nearly beyond his control. His typing speed is some five words a minute. Most of us can type at the rate of 60 or 70 words a minute. Typically we show people how to get ready for a conference speech. But for the Professor, this task has a whole lot of magnitude.

Plenty Of Time To Prepare This Stephen Hawking Speech

So this Stephen Hawking speech on the origins of the universe took some time to prepare. But his 2,500 strong audience at the Texas A&M University was impressed.

Astro-physics is not the easiest subject for an audience to comprehend. But the professor’s speech made things simple. Simple concepts, simple words and simple sentences.

He used analogies. Thus, he explained time with our globe, planet Earth. So, he described the South Pole as the dawn of time and time advancing with increasing latitude.

He neatly pre-empted the obvious question with the line:

To ask what happened before the beginning of the universe would become a meaningless question because there is nothing south of the South Pole.

That makes some kind of sense, I guess.

Examples And Analogies For Professor Hawking

He used an example of the bubbles in boiling water to explain the possibility of other universes out there…noting in his speech that most bubbles collapse very quickly and so do most universes. There’s a possibility of life out there, but only a possibility. Of course, we looked at this question in the Kepler presentation of 2010.

This was a well-received Stephen Hawking speech that quickly and succinctly got its point across.

When you nee to get your point across quickly and succinctly you can always find lots of public speaking tips here. And because you will find more than 100 top tips for speakers, there’s something for every occasion. Plus, when you need that extra focus on your own public speaking skills, then you’ll always find training useful. That’s because a well-constructed training session is just the tonic for your confidence and skills. So, when the time is right, please don’t hesitate to get in touch.