The Milwaukee Journal Sentinel might not be the first place you’d go when hunting down the country’s biggest breaking story. But staff at the Sentinel knew they had a story 10 seconds after they asked Republican Presidential candidate Herman Cain an innocuous question about Libya. Now, they knew that Herman Cain wasn’t too secure with foreign policy questions, but Libya remains current and is still newsworthy. They reckon that a simple pause suggests Mr Cain is struggling. 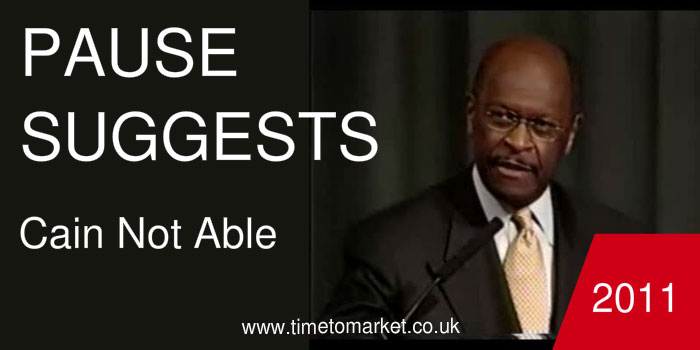 The Pause Suggests Too Much For Herman Cain

But the question threw the Presidential hopeful. It took more than ten seconds to get anything resembling a half-decent answer from the candidate. That’s a long time when you are answering journalists’ quick-fire questions. So what is it that the pause suggests?

Because it’s a long ten second pause if you are looking to become the next President of the USA. His little lapse is bound to raise questions about his ability to be President. Is he truly able?

Mr Cain defended himself later, noting that, “it was a pause.” He’s well-schooled in rhetoric and giving speeches; it was a pause.

But not as we know it. One of England’s pre-eminent actors, Sir Ralph Richardson, noted that…

The most precious things in speech are the pauses.

But answering questions is subtly different to giving a speech, where you have to know how to use pauses in a speech. We hope that Herman Cain can recover from this lapse…not least because he manages to invigorate the contest that’s got many, erm, um, months to go.

You can always read more tips for speakers with The Art Of Presentation. And when you want to find what else the pause suggests, why not join us for a public speaking course or public speaking coaching session. Please don’t hesitate to get in touch when you are ready to discuss further.