Bombshell Ruling Out Speech From Boris

Blonde Bombshell Drops His Own Bombshell

Just when you thought the political theatre could not get more extraordinary. We have high farce. A ruling out speech by Boris Johnson has taken the former Mayor of London out of contention for the Tory Party leader. Bizarre. 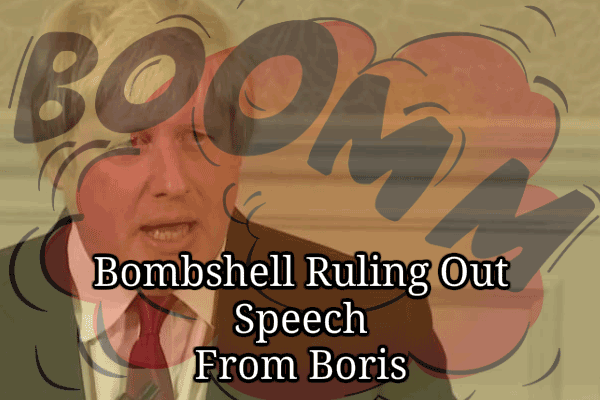 Some in the Tory party had doubted Mr Johnson’s dedication to an EU exit. And there were those who wondered whether Boris’ decision to campaign for Leave might have had more to do with a leadership ambition than a hostility to the EU.

So today’s ruling out speech at the St Ermine Hotel, London is pure theatre indeed. Boris, as disarming and effusive as ever, has left the field of play. Thus, he leaves the task of choosing an electoral winner that much harder for the Tories.

In terms of style, this was new model Johnson. Serious but charming. Not rushed, but not hesitant.

This is not a time to quail. This is not a crisis. Nor should we see it as an excuse for wobbling or self-doubt.

Nautical metaphors crept into his ruling out speech. They are very popular at the moment. But this seemed an appropriate turn of phrase.

This not a time to fight against the tide of history. But to take that tide at the flood and sail on to fortune

A rousing conclusion certainly got everyone anticipating his final words.

This is our chance to think globally again…Let us seize this chance, and make this our moment to stand tall in the world. That is the agenda for the next Prime Minister of this country.

But it was not to be. Boris was not going to stand as a candidate for the Tory party leader!

And with that bombshell, Boris thanked everyone and left the building. Amazing!