A smiling political assassin or a Prime Minister in waiting? There are at least two views you might have of Michael Gove, the Justice Secretary, after last week's astonishing fall-out with Boris Johnson. Yet his leadership speech might usher in a new view! 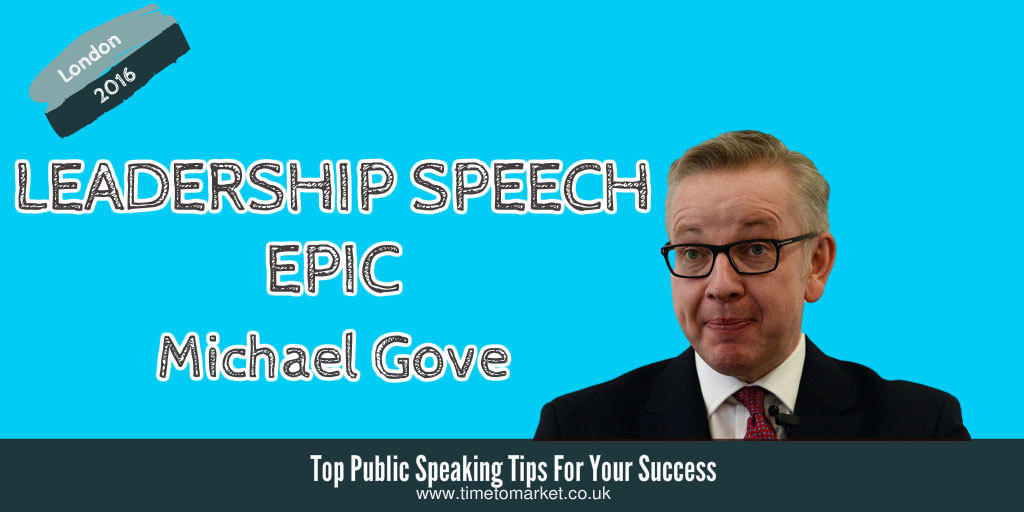 So this view might be that he's incredibly well-prepared. No sooner had the dust settled from the Boris Johnson fall-out than Mr Gove, the MP for Surrey Heath, gave a 5,000 word speech. A speech that set out why he should be the Tory party's next leader. So, was it calculated or prepared?

I stand here – and I am standing for the leadership – not as a result of calculation.

Yes, it was a long speech. But he's not a long-winded speaker. Because his leadership speech simply brimmed with ideas, concepts and some interesting thoughts. Yes, that's a hallmark of a Mr Gove speech. You don't get lists. And you don't get the series of trademark short sentences beloved by the current Chancellor (just take a look at the 2011 Budget speech, for example). No, because a Gove leadership speech is content-rich.

At a time like this – a hinge in history – two paths beckon. We can either try to muddle through and hope for the best. Or we can lean in, embrace the change the British people voted for and shape it in our interests – facing the challenges of the days ahead with cool heads and making the most of the new opportunities open to us with resolute and daring hearts.

Because he's fond of some rhetorical flourishes, we heard plenty of repetition.

We need a national ambition to build thousands of thousands of new homes a year, both private and socially-rented – led by someone who will not take no for an answer and who will push for diggers in the ground and homes for all come what may.

We need to build on the growth in apprenticeships – pushing without compromise for a first-class education for every child in this country and ensuring that those who do not go to university get the investment in the equipment and teaching they need to make a success of technical and vocational education.

We need bold leadership both to negotiate our new relationship with the European union, and to pursue new trade deals with the rest of the world…with the US, the Commonwealth and the growing markets in South and East Asia.

We need a tax structure that is simpler and fairer, which incentivises innovation, attracts investment and rewards hard work for people on lower wages.

Then, he mixed repetition with shorter sentences:

This country voted for change – and I am going to deliver it. I’m the candidate for leader who changed our education system.

The country voted for no more politics as usual.

No more business as usual.

I am the candidate for change.

There will be some who argue that now the country has voted for such far-reaching change in our relationship with Europe that is time to consolidate and tread water in the area of domestic reform.

I could not disagree more. We cannot meet this historic moment with timidity and caution. We need to press ahead with social and economic reform to build a better, stronger Britain ready for all the opportunities ahead.

So his lengthy leadership speech took in house-building, education, apprenticeships, trade, the public services and prisons. It was very much a wide-ranging speech that set out a broad and enlightened vision for the UK's future.

We shall see whether this revolutionary approach sways the majority of Tory MPs at the first ballot for the party's leadership.

Of course, when you need to plot your own leadership speech, or more realistically an interview presentation, then you'll find plenty of public speaking tips here. Because with more than 100 top tips for speakers and presenters, there's something for every occasion. Plus, when you want to boost your own public speaking skills, there's a training session just waiting for you. So, when the time is right, please don't hesitate to get in touch.