With bells ringing out at more than 300 churches across the country America is marking the 50th anniversary of the Martin Luther King speech celebrated as “I have a Dream“. 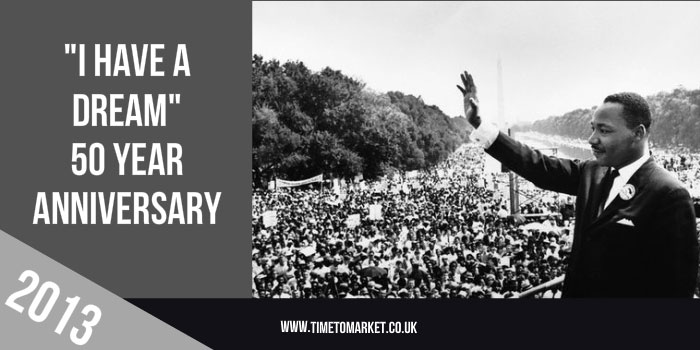 His speech, given in front of the Lincoln Memorial, was the focal point event of the civil rights march in Washington DC on August 28th 1963.

Students of the PresentPerfect™ presentation course will know something of the speech. Of course, it has an immediate and obvious position in American history. But it’s also a superb speech for all students of modern speech making.

Yes, its most notable feature is the “I have a dream” rallying cry. Not least as it’s repeated over again as the speech reaches its climax. But PresentPerfect™ students also focus on its three-part structure. It’s this that helps in the dramatic yet slow build-up to “I have a dream.”

The President, gave a speech in Washington today to mark the occasion.  He, of course, has used various pieces from the speech in his own earlier healthcare speech. So, it was quite an event and very inspiring as Washington marked the occasion in style. The President’s audience looked impressive. But it was nothing compared to the mass of crowds in Washington 50 years ago.

So, you’d imagine that its creation and delivery were matters of record. Yet, even today you might learn that key passages were only added to the speech on the go. People made the claim a few years ago. And, they have repeated it again this week. What is clear is the impact of the march. Its leadership and the speech itself had a huge impact on civil rights in the USA.

We might never know the full story. But the speech, its rousing rhetoric, its soaring metaphors and use of repeated phrases will surely be testament to solid speech writing and speech delivery for a further fifty years.

Whatever your own public speaking needs, please don’t hesitate to contact us at Time to Market. You can aim to boost your own public speaking confidence or skills with a private coaching session. Or, perhaps we can train your own team in the office with a tailored course. You might never get to give a speech with the world impact of a Martin Luther King speech. But that doesn’t mean you shouldn’t aim high!