There are moments in anyone’s campaign for political office when it seems that anything that could go wrong, does go wrong. Republican Presidential candidate Mitt Romney is having one of those moments. He’s had such moments before…with his ill-fated speeches in Europe and Israel during July and an earlier PowerPoint presentation. However, he can still count on the support of the great Republican speechwriter Peggy Noonan. 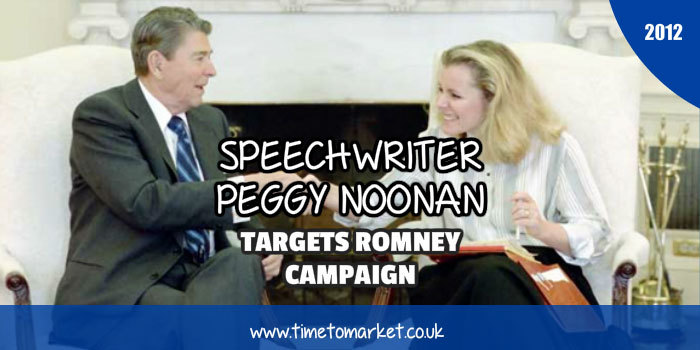 Speechwriter Peggy Noonan Speaks Out On The Romney 2012 Campaign

But this moment is different to other political campaigns.

Commentators noted that his approach to the Middle East smacks of opportunism. His campaign funds are dwindling fast and some of his comments, made public several months after their voice recording, suggest he’s fatalistic about his chances.

But one of the conservative movements greatest speech writers, speakers and thinkers, Peggy Noonan, has also waded into the mix.

To be fair to Peggy Noonan, who made her name as a speech writer for President Reagan, her contributions are positive. Because she reckons the campaign can still achieve things.

In a speech in New York and in her Wall Street Journal blog she suggests intervention in the campaign. Intervention by more youthful and energetic conservative politicians.

Romney always seems alone out there, a guy with a mic pacing an empty stage. All by himself, removed from the other humans. It’s sad-looking. It’s not working.

And she suggests that Romney steer clear of press conferences and stick to speeches.

He should stick to speeches, and they have to be big—where America is now, what we must do, how we can do it.

With only a few weeks to go before polling day it remains to be seen whether the thoughts of speechwriter Peggy Noonan, one of America’s greatest speech writers will be noted.

You can read a whole series of tips for public speaking with our posts, podcasts and videos. So, when you need to write a speech then you can start with some good tips and suggestions that we source from our courses. Or, you might benefit from some speech writer inspiration. And, when the time is right, please don’t hesitate to get in touch about conference speaking training.