It was only one word. But it was a word that spelled trouble for the Deputy Prime Minister, Nick Clegg. The trouble concerned a speech that Mr Clegg’s office had distributed to the Press Association in advance of him actually delivering it. That’s a standard operation for a politician’s staff keen for the Press to report on a speech in full. A bigot speech no less. 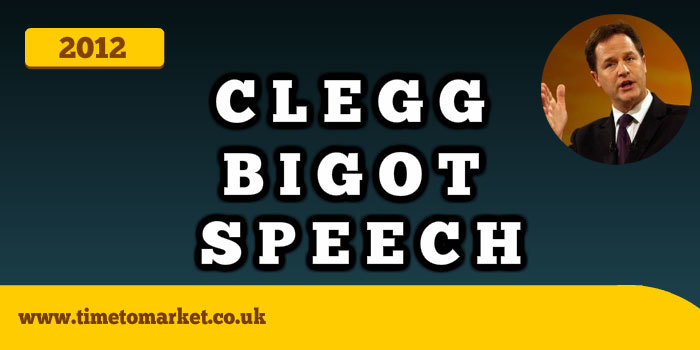 But it’s also a dangerous operation if no-one actually reads, edits or vets the speech before it’s sent out via email.

On this occasion the danger involved the word “bigot” that was contained within the speech. No-one spotted the word. Or, if they did, they didn’t find anything wrong with it. They certainly see it as a bigot speech.

But within 90 minutes of the speech being emailed to the Press Association, Nick Clegg’s office tried to withdraw the email communication. That doesn’t work. Recipient interest in an email simply grows out of all proportion when its sender tries its withdrawal. A futile and calamitous move for a bigot speech.

The damage had been done as the Press Association gleefully reported Mr Clegg’s discomfort with the speech. And Mr Clegg? He went on record as saying how discomforted he was at any suggestion that he would ever try to use the word “bigot” in a speech. Yes, but he had and he did.

And his opponents in the same-sex marriage argument? They in turn went on record with their distaste for the Deputy Prime Minister’s purported remarks in the bigot speech.

A calamity that would have been avoided with some proper speech editing. So, distribute your speech in haste, and then repent at leisure might be a summary. We also have some other more current warnings for what not to say in your speech.

You can, of course, discover more public speaking and speech writing tips with Time to Market. You can always read our tips for public speaking, listen to the podcasts or watch the videos. And, when you are ready to give your own public speaking skills a boost, then please don’t hesitate to get in touch.