Mario Draghi might be new to his job as head of the European Central Bank (ECB). But his speech at the European Banking Congress in Frankfurt last week suggested calm consistency. The calm consistency one might expect from a former Goldman Sachs banker. A Super Mario speech, indeed. 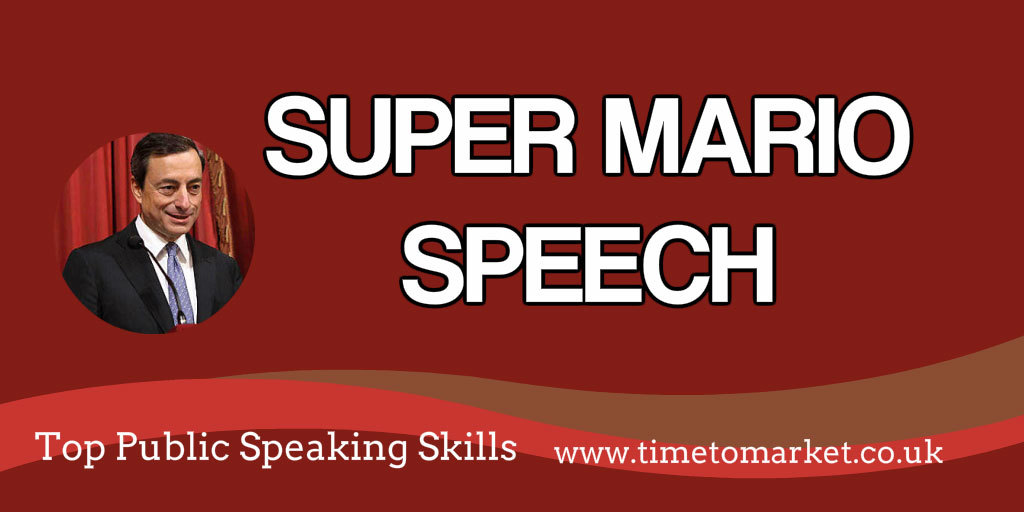 A Super Mario Draghi Speech Starts His Tenure At The Bank

In fact, consistency was one of the main structural elements to the Super Mario speech: continuity, consistency and credibility. He might be new to the role of president. But not to central banking.

So, this Super Mario speech was solid and unremarkable. One might pick holes in his comments on inflation policy…one might even argue that they were disingenuous. But that’s another matter.

Long sentences characterised this Draghi speech to his audience of banking professionals and Eurocrats.

We were treated to:

That was probably the longest sentence in the Mario Draghi speech. Thankfully jargon wasn’t a big feature. Yes, there was some banker jargon and terms not typically used on the high street…but this was the head of the European Central Bank and he certainly knew his audience.

Jargon In This Speech

We did pick up some old chestnuts, beloved of Euro-area politicians and officials in this Mario Draghi speech. There was:

a much more robust economic governance of the union going forward.

At the same time, and going forward,

We also had one or two mixed metaphors that showed Mr Draghi’s speech writer was trying:

And his conclusion? A masterful piece of Euro-area oratory:

In spite of the current challenges faced by the global economy, we must resist temptation to resort to unilateral policies, and we must work together to ensure that the gains achieved are firmly secured for future generations.

Irresistible! It wasn’t exactly a call to arms. But this was a solid speech to a banking audience that has some work to do right now. And that’s more than many people have in Europe…

You can discover plenty of public speaking tips with The Art Of Presentation’s series of posts, podcasts and videos. And, with more than 100 tips from which to choose, there’s something here for every occasion. Plus, when you want to give your public speaking skills a further boost, then you can always join us for a public speaking course. So, when the time is right, please don’t hesitate to get in touch.