It's going to happen at some stage during everyone's public speaking career. It's that moment when your audience's attention is seized by something very close to you, something over which you have no control. No, not that! It's the moment when the set, the podium or the lectern itself falls to bits. Sways, wobbles or just collapses. It's an experience no two speakers would ever forget. 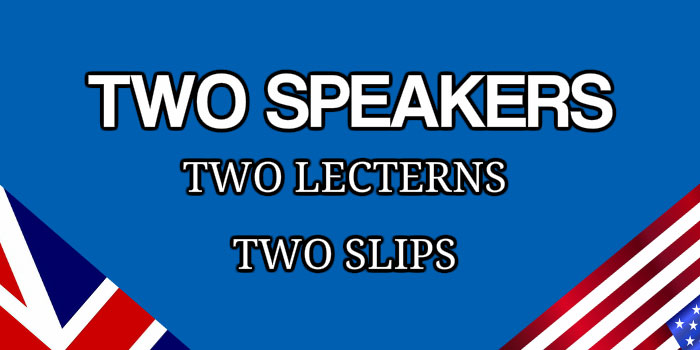 It's definitely alarming. And it can be highly amusing when it happens just at the wrong moment, which of course is at any time that you are in full flight. Of course, it can also be frightening. Just think about the Theresa May conference speech nightmare.

How you handle the issue of a lectern wobbling or falling to pieces can define you as a speaker. It happened to the Prime Minister, David Cameron, last week. He'd called a hastily convened press conference after his latest round of EU (European Union) wrangling. That should be the clue..."hastily convened."

Speakers Slips At The Lectern

Team Cameron and others quickly set up the all essential props for the cameras. They included a photogenic backdrop and a State seal on the front of the lectern. And because of their hurry, they attached the State seal with double-sided tape.

But it was the double-sided tape that gave way once the Prime Minister was in full flight. Down went the seal to much amusement. And, when one of the Prime Minister's aides tried to mend it? Well, it simply happened again. Superb.

And the Prime Minister's reaction. He ignored the fuss and kept going. A superb reaction.

But a reaction that differed to that of President Obama when he experienced the same problem four years ago. President Obama made light of it. In fact he even made a point of discussing it:

All of you know who I am.

Two speakers and two very different approaches to the same problem. Choose the solution that suits you best. Then carry it off with some aplomb!

You can discover other ways to carry off your speech with aplomb when you join a public speaking course at one of our training centres. Alternatively, you can always have us organise a training event for your whole team. Whatever your requirement, why don't you give us a call?