The archbishop of New York, Timothy Dolan, is used to giving some serious sermons and addresses to his Roman Catholic flock. But his speech in Rome last weekend must have had him on edge. Yes, the eighth cardinal archbishop of New York has a reputation as a sound communicator. But this was different. Because this Timothy Dolan speech was definitely a Red Biretta day occasion. 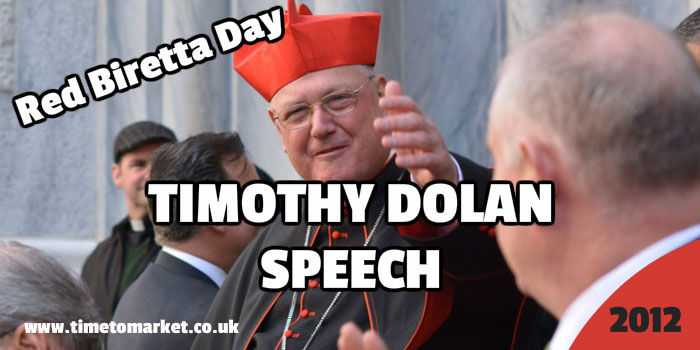 Our video doesn’t even get to his speech. It was a private affair. But we can get a sense of the occasion as his audience of Pope, cardinals and “cardinals to be” take their seats.

And there’s an immediate disconnect. The symbolism of flowing cassocks and blood-red birettas contrasts with the modern business-like atmosphere of the Vatican conference room. It’s a well-upholstered auditorium yet it’s familiar to anyone who’s given a conference speech.

This Timothy Dolan speech before the college of cardinals proved successful. The Pope mentioned his speech the following day when he elevated 22 churchmen, including archbishop Dolan, to become cardinals in a simple ceremony. This was altogether more edifying than the priestly PowerPoint presentation in Tyrone.

Timothy Dolan Speech Before The Cardinals

Speaking in Italian the Archbishop set out seven “planks” of a strategy for evangelizing the church of Rome. Seven main points in a speech is too many for most audiences. But, I suspect that Cardinals can take this amount of detail.

His speech showed off a sound grasp of technique. He used rhetorical questions, such as:

Holy Father, can you omit “to the shedding of your blood” when you present me with the biretta?

And his speech also took full advantage of story-telling techniques:

Cardinal John Wright…We thought he would give us a cerebral homily. But he began by asking, “Seminarians: do me and the Church a big favor. When you walk the streets of Rome, smile!”

So, point five: the missionary, the evangelist, must be a person of joy.

“Joy is the infallible sign of God’s presence,” claims Leon Bloy. When I became Archbishop of New York, a priest told me, “You better stop smiling when you walk the streets of Manhattan, or you’ll be arrested!”

Story Telling Works In This Speech

Mixing story-telling and humour proved a good combination. And his rousing conclusion to the speech pulled off the same trick. Mixing humour, a story and his grasp of Italian he roused his audience with:

When Cardinal Bertone asked me to give this address in Italian, I worried, because I speak Italian like a child. But, then I recalled, that, as a newly-ordained parish priest, my first pastor said to me as I went over to school to teach the six-year old children their catechism, “Now we’ll see if all your theology sunk in, and if you can speak of the faith like a child.”

And maybe that’s a fitting place to conclude: we need to speak again as a child the eternal truth, beauty, and simplicity of Jesus and His Church.

No doubt we will hear more of Cardinal Dolan.

Unlike Cardinal Timothy Dolan, you might not have to give a speech in such auspicious surroundings. But when you do have that calling for a major conference speech, please don’t hesitate to get in touch when you need either a half-day practice session or a speech rehearsal.