There’s something deeply satisfying about a speaker noting that older people, retirees, are still participants in society. So when that speaker is the Archbishop of Canterbury it’s more satisfying still. He’s on the verge of retirement himself, of course. He finishes as Archbishop at the end of the month. Thus, this was very much his archbishop retirement speech in the Lords. 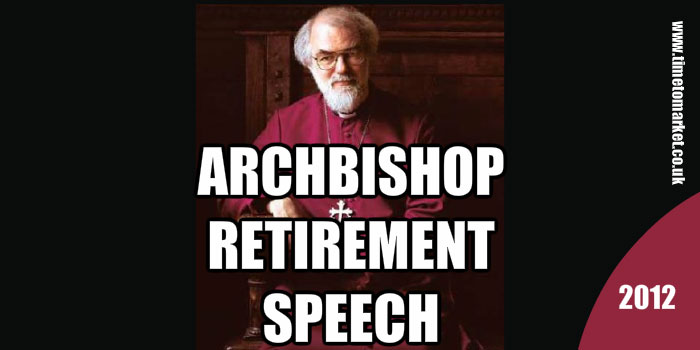 But there’s no immediate prospect of slippers and a bath chair at the age of 62 for Rowan Williams. He’s the next Master of Magdalene College, Cambridge, starting in January 2013. And he becomes chairman of Christian Aid in March 2013. Participating and busy. Retirement can wait.

Indeed his archbishop retirement speech in the House of Lords this week showed that his public speaking style hasn’t changed much during his tenure in Lambeth palace. Five years ago his speech on Islam and English law at the Royal Courts of Justice kicked up a storm. That storm was caused by the speech’s impenetrability. Not its subject.

And his retirement speech in the House of Lords yesterday was equally heavy going.

His retirement speech was the first in a debate on the roles of older people in society. And in beginning his speech he made clear his long winded intentions:

I very much doubt whether I need in Your Lordships’ House to underline the fact that those over – say – 62 – are readily capable of making a contribution to society; and I think we may take as read declarations of personal interest in this regard; though I must also declare a specific interest as a patron or Vice-President of most of the voluntary agencies I shall be mentioning in the course of these remarks.

That was a sentence and a half. Fortunately he had a small dig at his own age in this comment. Thus, he managed to lighten the moment, somewhat.

Quality To This Retirement Speech

Undeniably there was quality to his speech. And no doubt their lordships took it all in. But beyond Westminster this debating-style speech will remain impenetrable for the majority. Retirees or not.

Lengthy sentences, conditional clauses and word length point to the speaker’s huge intellect and knowledge. This might work for a debate in the House of Lords or Cambridge. But I suspect that it’s not going to work in the sharp-elbowed work of the charitable sector where he starts work in March 2013.

When you are looking for some inspiration for your public speaking you can always review our series of public speaking tips and suggestions. And when you need some extra support please don’t hesitate to contact us about public speaking training or coaching. For you or your team.