For each and every one of us there’s probably a time and a place to stop. A time to hang up our boots. Or a time to retire or give a final speech.

But retirement is a relatively new phenomenon for peers in the House of Lords. Since it was only last year that they received the “right” to retire with the enactment of the House of Lords Reform Act in May 2015.

So, it’s a “right” that other peers have already taken. 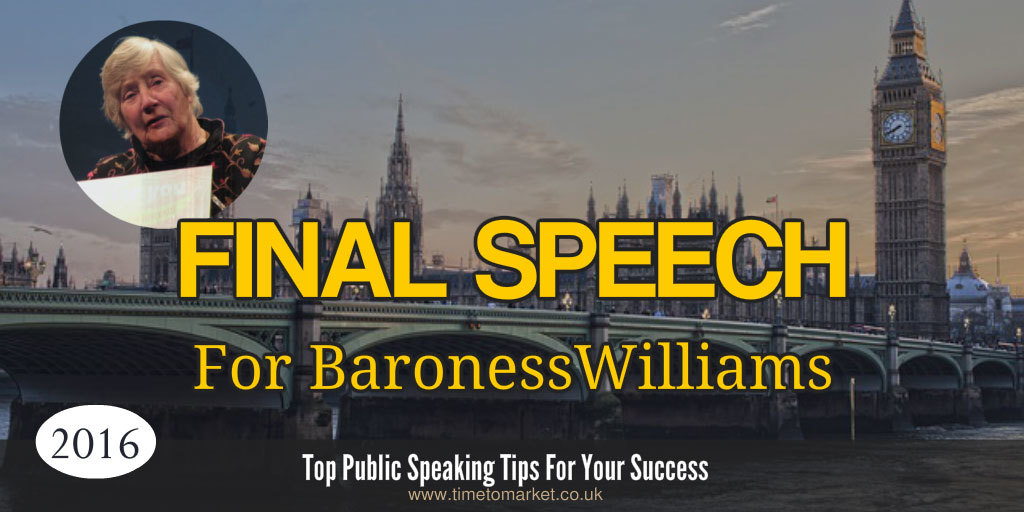 Final Speech For Baroness Williams | “Shirley Williams at Birmingham 2010” by Keith Edkins – Own work. Licensed under CC BY-SA 3.0 via Commons

And last week it was the turn of Baroness Williams to mark her retirement with a final speech in the House of Lords.

A final speech, a valedictory speech, seems to be the principal benefit of retiring. It can’t be often that you’d look forward to a retirement speech, perhaps. However, other benefits include an all-expenses paid leaving party and various visiting rights for the retiring peer and their guests. Very nice.

There’s a hope that the House of Lords will become a more dynamic second chamber infused with fresh energy. That’s the result of the elderly peers’ voluntarily retirement with benefits attached. Let’s hope!

Final Speech in The House of Lords

Baroness Williams’s speech was certainly well-constructed and thought through. Yes, there were a few stumbles. And I have to suspect that her eyesight might well have been a factor in one or two of those speech stumbles.

But, put that to one side. Because, this was a practised and rehearsed final speech from the Baroness. Despite her self-deprecating swipe at her own eyesight, she gave her final speech without the apparent use of her notes. Ever the consummate politician.

This was certainly a gem of a final speech from one of the true greats of British politics.