It’s five months since the last Julian Assange speech from the balcony of the Ecuadorian Embassy in central London. So to mark the first six months of his “captivity” the Wikileaks founder has once again taken to the balcony to address a balcony speech to his loyal supporters. 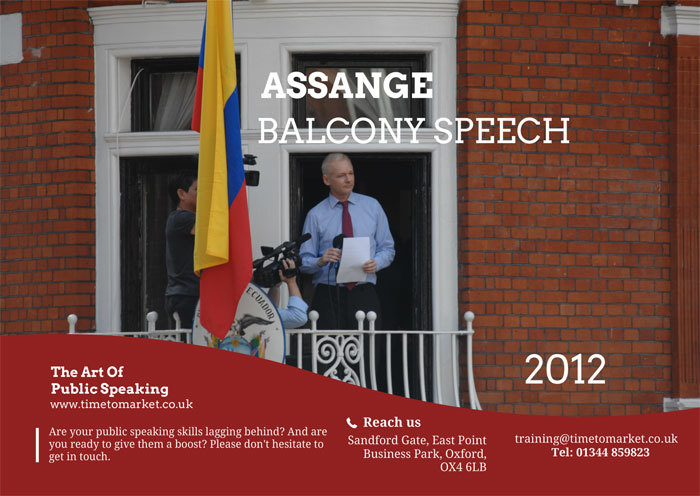 In truth the rain might have kept many away. But there was a crowd of some 100 people to listen to his speech on this occasion.

In his speech he once again thanked the the Ecuadorian people and President for their hospitality. They’ve provided some shelter for him from rendition to Sweden and the eventual prospect of rendition to the USA.

Either way, Mr Assange is looker less fit than when we last saw him give a speech on August 19th 2012. These days of confinement can’t be that good for him…albeit they might well be good preparation for the fate that awaits him if the British police manage to nab him.

His speech was far from compelling on this occasion. But his presence will have more impact than today’s content.

Content will come later. In his speech Mr Assange noted that a further one million documents will be uploaded by Wikileaks during 2013.

That sounds like a whole lot more Wikileaks trouble from one small balcony speech.

You can discover a range of public speaking tips with our series of regular tips and suggestions for public speakers. And, when you are ready to build your public speaking skills further, then please don’t hesitate to get in touch.