Just like waiting for a bus, you wait for years for a spymaster speech to come along and then suddenly there are two speeches. First we were treated to a spy chief speech by Jonathan Evans the spymaster at Britain’s domestic security agency MI5. And today, the Director General of the Australian Secret Intelligence Service (ASIS), Nick Warner, gave an Australian spymaster speech. They are all at it. 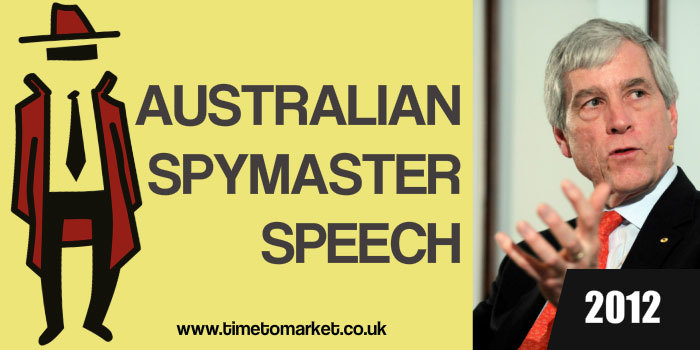 Mr Warner’s speech at the Lowy Institute for International Policy was the first public speech by anyone at the Canberra-based ASIS for 60 years.

Mr Warner, who’s been the Director General for 3 years, has been very quiet in those years. So, no speeches and no interviews.

In fact it’s only been 20 years since Australia’s foreign spying and intelligence agency was officially noted to exist. And even today ASIS only recognises Mr Warner as the only employee! Superb.

No Juicy Morsels In This Australian Spymaster Speech

So, Australia’s media has seized upon this speech. But if they were looking for juicy morsels of information, they were disappointed. No chance.

His speech was a way of marking 60 years of service. It paid tribute to the many agents who’ve worked at the agency and those working today. His speech made references to the work that ASIS conducts…counter people smuggling and counter-terrorism to name but two.

He spoke with a consistently measured tone with an even pace. It was certainly a bit husky–the result of a cold that he noted near the beginning of his speech.

Should we expect more speeches from spymasters around the world? Perhaps so. There’s undoubtedly some concern with justifying public expenditure in straitened times. And spymasters and their organisations do draw from the public purse. So more speeches in all likelihood…but don’t expect too many revelations.

You can read plenty of public speaking tips from Time to Market. They are all out in the open and unclassified. And, when you want to give your public speaking skills a real boost, please don’t hesitate to get in touch.