Italy’s Prime Minister Silvio Berlusconi aimed to calm the financial markets yesterday with a speech in Parliament. It’s somehow quite reassuring that we can still hope that a Berlusconi speech can calm fears, settle nerves and generally provide reassurance. 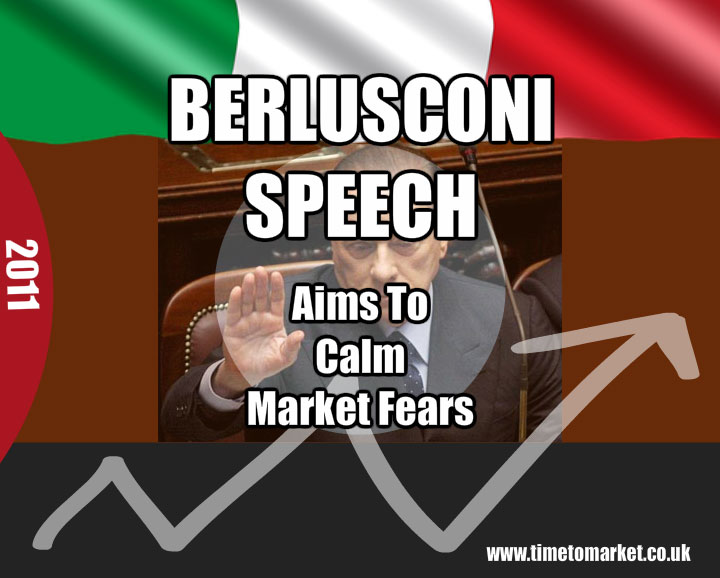 People were worried because an earlier report had suggested that Italy would be the next European State to require some form of financial bail-out. And that’s a tricky suggestion given the sheer size of Italy’s economy.

Was This A Successful Berlusconi Speech?

So, with this background, was his speech successful? Most commentators reckon that it wasn’t. They suggested that the speech contained little detail, few new practical measures and no fresh initiatives. All in all, it failed to rally the markets.

The style, tone and tenor of the Berlusconi speech itself failed to rouse Italy’s passion. It was solid and at times nearly impenetrable. Not the stuff of Roman legends.

The country is economically and financially solid. In difficult moments, it knows how to stay together and confront difficulties. The government and parliament will act, I hope, with a large political and social consensus to fight every threat to our financial stability. Today more than ever, we need to act all together.

As a rallying cry this key part of Silvio Berlusconi’s speech lacked something. And it didn’t get much better:

As often happens during a crisis of confidence, the markets overall are not evaluating correctly the merits of credit systems; investors’ evaluations of our bonds don’t take into proper account the solidity of our banking system, the healthy asset base of our families and companies, contained foreign debt, the lack of imbalances in the real estate sector and the prudence followed on budgetary policies during the crisis.

He might well be right. But this particular level of oratory wouldn’t have carried the day in the Roman Forum. We can but hope that the money lenders in the forum have got it wrong this time around.

When it’s your turn to inspire confidence and rally your team with a speech you can always look to our series of public speaking tips to help. There’s something for every event, such as giving your conference speech. Or, as an alternative, why not consider a public speaking skills coaching session. Because a day’s coaching can give you all the skills and confidence you need for your next big speech. Please don’t hesitate to get in touch when the time is right.