Governor Rick Perry of Texas might or might not be considered a Republican candidate for the presidency next year. Will he run or won’t he run? Last week he was in Denver, Colorado where he was due to address a thousand attendees of the Western Conservative Summit. Amid speculation that he would announce his candidacy we heard a short Rick Perry speech instead. 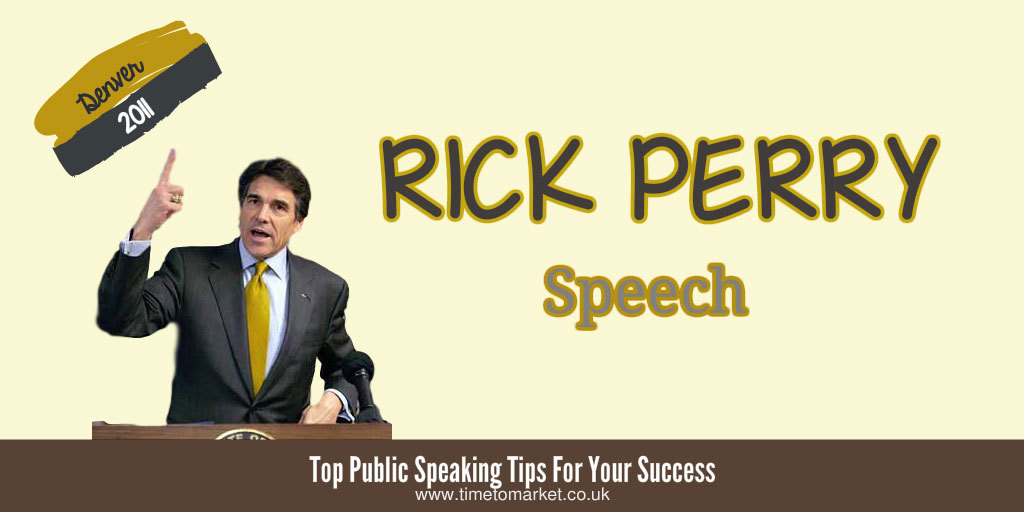 Now, we have to say that it was a very short speech for a potential candidate…only ten minutes. Yes, that’s not a record for a candidate. But it’s a good sign. Since who really wants to listen to a really long speech? Certainly not the audience for this Mayor Goodman speech in Las Vegas. At 80 minutes, it was an epic.

Speaking slowly and assuredly the Texas Governor gave as many signals as he possibly could at this stage. His pauses were remarkable for their timing…he was in no rush to say too much. No doubt that will come later.

He had a receptive audience for his speech so he aimed to capitalize. In his ten minute speech he urged his audience to text FORWARD to 91613…using the feedback as an indicator of support and building up his text mailing list in the process. A good example of a speaker using all the available technology to gauge his audience’s response.

His speech finished with the line:

There is no better time to move our country forward.

That was a bit of an over-used hackneyed expression that took the shine off this short and well-timed speech. However, this Rick Perry speech wasn’t that dissimilar to other jargon-rich speeches. Just take a look at the President’s Libya speech in 2012 for equally dreadful jargon.