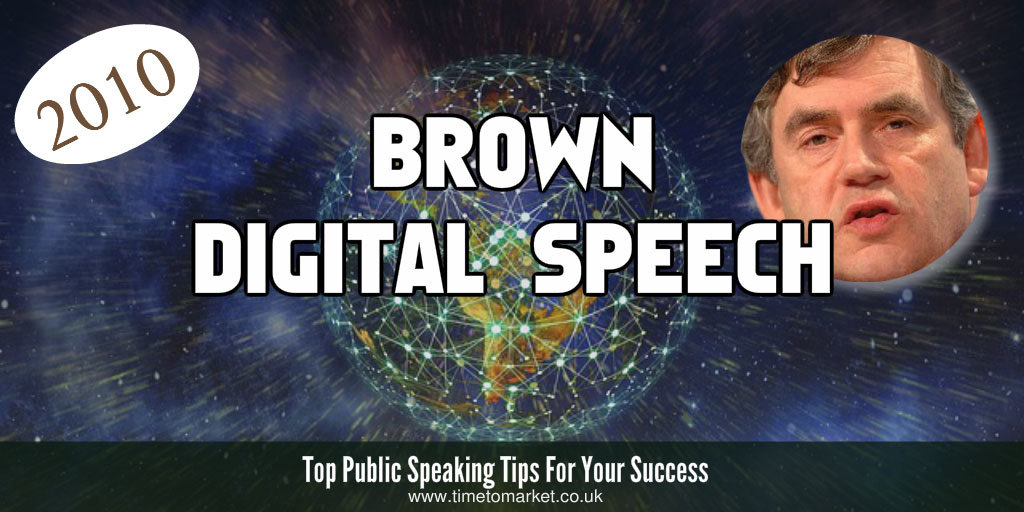 He then introduced each of the three parts with the same phrase:

As he warmed to his theme, the Prime Minister showed his grasp of current jargon—undoubtedly prompted by Lord Adonis. So we had references to, “the semantic web,” “next generation web,” “widget” and “disruptive business models.” Yes, we did, of course, hear some superb jargon in this Gordon Brown digital speech.

He also announced that an Institute of Web Science would be created. Thus, an immediate budget of £30 million of taxpayers money is ready to seize the social and economic benefits for citizens. Plus he noted that an Open Data Board would be created. Thus, lots of new quango opportunities for the next Parliamentary term…not forgetting Martha Lane Fox’s role as UK Digital Champion!

The Prime Minister then used a list of three to summarise the steps needed to achieve his goal for Britain to be the leader in the next stage of the digital revolution. Furthermore his digital speech made clear the extent of his digital ambitions; not just that Britain should be a leader, not just that Britain’s taxpayers should benefit from more efficient streamlined government.

No, his speech suggested that politics itself should be renewed by IT. “Deliberative Democracy” should be renewed by the”semantic web.” Now, that’s some ambition that will need more that the newly released 10 Downing Street iPod App to “deliver.” Because this really is something else.

Connectivity Is A Fundamental Freedom

With this Brown digital speech he likened access to the internet via broadband technology as a fundamental freedom. So, as he used the analogy of electricity, he wondered whether the denial of access to electricity to a section of society would be acceptable. Not at all. So, as he used a three-part list he observed: “This is unfair, economically inefficient and wholly unacceptable.”

Finally, his conclusion used the same device; a three part list with good use of repetition.

As it goes, this was a good, solid piece of speech making. If there is a problem with the speech it has to be the language. Because the jargon really hurts.

Since in this Gordon Brown digital speech, the Prime Minister became an IT consultant caricature. He doesn’t plan to reduce costs let alone cut costs. No, he aims:

“…to drive down the Government’s property costs.”

He doesn’t aim to introduce change. No, he aims:

“To drive this ambitious programme forward.”

You can discover plenty of public speaking tips with our series of tips for speakers and presenters. And, with more than 100 posts, podcasts and videos from which to choose, there really is something for every speech you might plan. Plus, when you are ready to give your public speaking skills a further boost, then you’ll find a public speaking course to be a worthwhile option. Because with the right training you can always expect to build your confidence and skills. So, when the time is right, please don’t hesitate to get in touch.