Budget Speech Marathon Proves A Pain In The Back For Minister

Many laws of the natural world are inviolate. Others, such as Moore’s law of chip processing power, prove their validity each year (for the moment). So how about a law about budget speeches, or a budget speech marathon. In particular, it’s those budget speeches in Parliaments, Congresses and Assemblies the world over that set out government spending for the next 12 months. 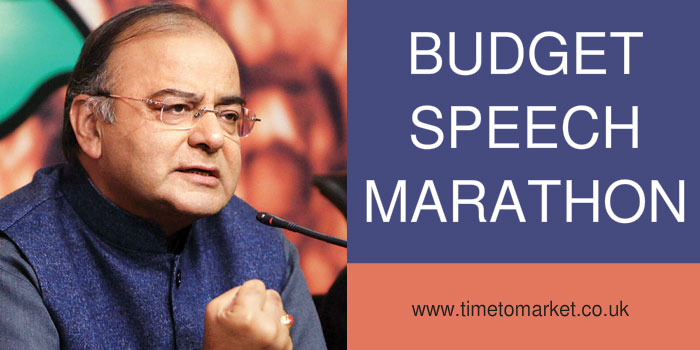 Much will depend on your politics. Which is why the iron law of budget speeches probably won’t get off the ground. For everyone who jeers a speech’s length there’s someone who cheers the speech’s breadth.

But if you thought your typical budget speech was a pain in the back (or something far worse), then spare a thought for India’s new Finance Minister, Arun Jaitley. He had the job of unveiling the Government’s tax and spend plans in Parliament this week. And what a marathon job he made of it.

For this second section of his budget speech, the Speaker allowed him to remain seated and deliver his speech from that position. Sedentary perfection.

Most of the House sat back and seemed to be listening. Others, a small minority, tried to butt in and pose questions to no avail. At least that was participation! But Mr Jaitley’s party has a huge majority in the new Parliament, so it was really no surprise that he could get away with such a budget speech marathon.

In a historical context though, his budget speech was a mere introduction compared to the budget marathon speech of four hours 45 minutes by William Gladstone in the British Parliament. Way to go.

When you need to avoid a marathon speech or time plan your next conference speech you can always arrange a skills refresher to get you ready. Why don’t you call to discuss?

Previous Post Hillary Clinton Speech Fees Reach $250,000 At The University of Connecticut Next Post 24 Alternatives to PowerPoint and Other Presentation Tools