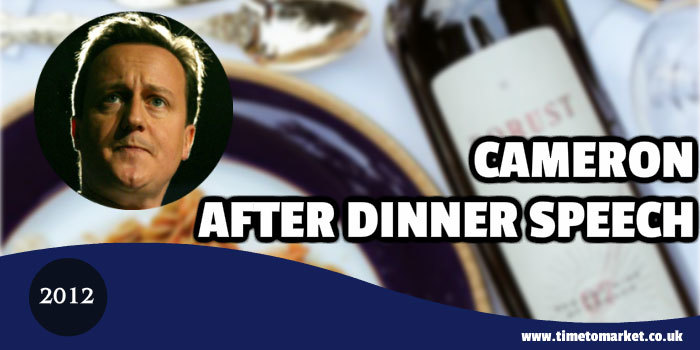 David Cameron In The Stew With After-Dinner Speeches

The sting had two parts. First, journalists posed as investors. Then, they managed to get Mr Cruddas to say that dinner with Mr Cameron in Downing street could be arranged in exchange for a large donation. Nothing bite-sized about it. Peter Cruddas was, until his immediate resignation, the Party’s chief fundraiser.

Mr Cameron’s speech at the Alzheimer’s Society in London was overshadowed by the story stewing in all the media. And, of course, his comments about the meals for deals arrangements weren’t on the menu when his speechwriter prepared his speech. That speech was meant to be about new initiatives in dementia treatment and their funding.

Instead the Prime Minister served up a whole course of humble pie. Delicious.

After the speech, Downing Street aides released the guest lists for a number of the meals hosted by the Prime Minister. Everything except the seating plans. Or, the menus.

No doubt we’ll hear more of the after dinner speaking meals for deals, particularly as Rupert Murdoch has joined the fray.