A series of seemingly unconnected statements formed the introduction for this George Osborne Budget speech in Parliament this afternoon. And that’s certainly an odd way to start your speech, but it did seem to work. 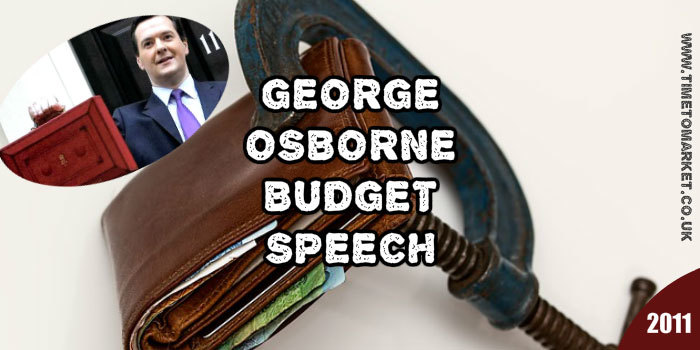 Britain is going to earn its way in the world.

There is no other road to recovery.

This Budget supports working families and helps those looking for work.

And it is on the side of aspiration: those who want to do better for themselves and for their families.

This Budget reaffirms our unwavering commitment to deal with Britain’s record debts.

This was the Chancellor’s third Budget speech and perhaps one of his most important to date. Not that anyone should have been that surprised since most of the contents of his speech were leaked ahead of time.

That was of course a departure from the long-held tradition of budget speech secrecy. Still, coalition government demands more conversation. So they also leak more as a result.

With his introduction out of the way the Chancellor, George Osborne, turned to matters economic with a quick and easy appraisal of the country’s financial position vis à vis income, expenditure, borrowing and employment. Set in the context of the European economic perspective this section of his speech proved clear.

His speech used some simple devices to outline his government’s approach–a position taker combined with a not this, but that clause.

Some would have been tempted to spend the windfall.

I do not propose to spend it.

Instead, I have used it to pay off debt.

His use of the word “windfall” might also be a dig at former Chancellor Gordon Brown’s expense.

Longer Sentences In This Speech

For example, his speech contained:

I can confirm today that there will be an automatic review of the state pension age to ensure it keeps pace with increases in longevity.

Presumably we are all living longer.

This George Osborne budget speech also poked fun at the previous administration. So, we heard a long-standing line about Gordon Brown’s sale of the country’s gold reserves:

We are also taking the opportunity to rebuild Britain’s reserves, which had fallen to historically low levels.

I can confirm our gold holdings have risen in value to £11 billion.

This does not include the 400 or so tonnes of gold sold a decade ago for £2 billion, and which would now be worth six times that at over £13 billion pounds.

Digs Aimed At A Previous Chancellor

George Osborne’s speeches often contain these little digs at the former Chancellor/ Prime Minister, Gordon Brown. To the listening public they must be a mystery. To his own supporters in the Commons they are poetry.

In his conclusion the Chancellor’s speech resorted to a series of mini-sentences. The Parliamentary political equivalent of a PowerPoint bullet list.

And thanks to the other new taxes on the rich I’ve announced today, we’ll be getting five times more money each and every year from the wealthiest in our society.

So the richest pay more.

The Chancellor’s public speaking style has grown with him over the two years of this coalition government. The rather squeaky and rapid-paced delivery of old has been replaced with a slower more certain delivery that’s richer in tone. Whether the political content of his Budget speech is equally rich is another matter.