David Cameron launched the Tory Party’s 2010 election manifesto yesterday at the less than inspiring, derelict Battersea power station. The assumption has to be that it was cheap and convenient. Much like the jibes that he threw at his contenders for electoral success. So, this might be a new society speech. But the methods are pretty traditional. As was London for a venue. Because the Lib Dems chose London for their Nick Clegg manifesto speech. 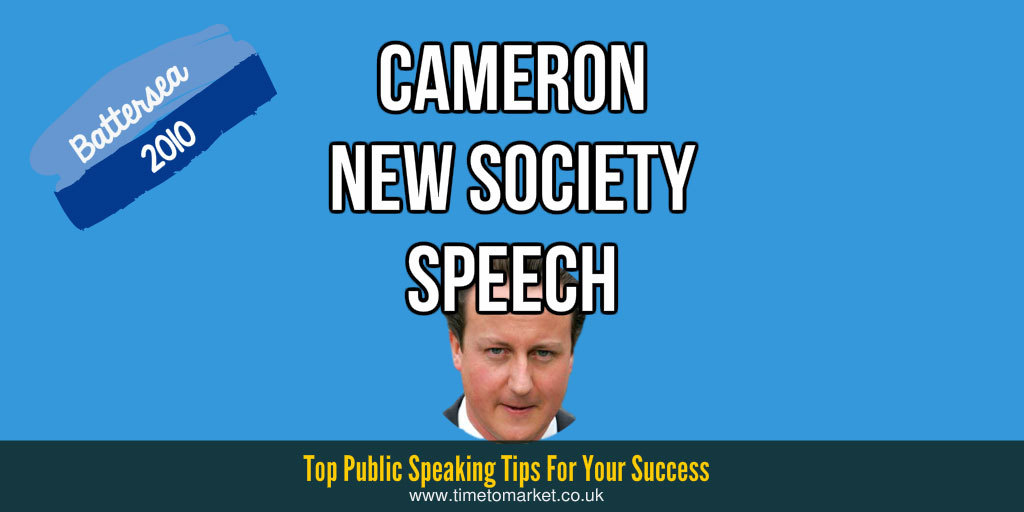 His new society  speech took the theme of the “New Society.” A theme that’s been developed over several years with speeches by Oliver Letwin and Iain Duncan Smith. And, of course, the theme is always a useful way to engage an audience.

No Fear With This New Society Speech

David Cameron’s inspiration is the new society but he’s not afraid to borrow from other societies. His use of “we can,” is distinctively attributed to President Obama’s successful election campaign of 2008:

“We can deal with our debts. We can mend our broken society. We can restore faith in our shattered political system.”

Thankfully he didn’t follow up with a “Yes, we can.”

He borrowed from the inauguration speech of President John Kennedy in 1961:

Empire-builder Cecil Rhodes also got in on the act, though without an attribution:

Not dissimilar to many other leading politicians Mr Cameron favours the position taker as a rhetorical device. And he used these well at yesterday’s manifesto launch:

“Labour say the economy will collapse unless they keep on wasting your money.

We say: this jobs tax will kill the recovery.”

A clever use of the repetitive phrase, “Instead of…” was effective. Used five times in succession, it worked well. Here’s an example:

…let’s give them the power to do it.”

So much to do, so little time to do it in. That’s the challenge for David Cameron’s Conservative party. This new society speech set out the scope for that challenge.

You can discover more than 100 top tips for public speaking with our regular series of posts, podcasts and videos. And when you need more focus on your own public speaking skills, then you can always consider training or coaching. So, when the time is right, please don’t hesitate to get in touch.