Cameron Speech Waxes Lyrical Over State Of The Union

We’ve got several months to go before the referendum on Scottish independence in September. Until then we can expect a huge number of speeches, debates and argument from all sides. And we have all expected a big David Cameron speech. 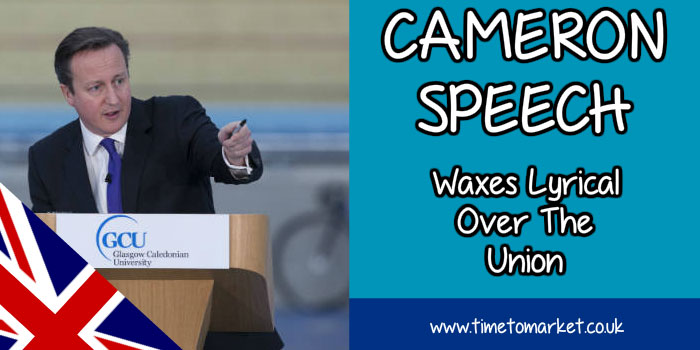 A David Cameron Speech Waxes Lyrical Over The Union

So, last weekend it was the turn of the Prime Minister, David Cameron. He gave his speech in London at one of our newer “conference” venues, the VeloPark in the Lee Valley.

The Cameron speech made good use of the surroundings and the historical connection to the London Olympic games of 2012 for its introduction.

Less than 2 years ago, this velodrome was a cauldron of excitement. Chris Hoy was ripping round at 40 miles per hour. I was up there. I had a whole seat but believe me I only used the edge of it. 3 more golds – an incredible night. But for me, the best thing about the Olympics wasn’t the winning; it was the red, the white, the blue. It was the summer that patriotism came out of the shadows and came into the sun. Everyone cheering as one for Team GB. And it’s Team GB I want to talk about today. Our United Kingdom.

That imagery then set the scene for the rest of the Cameron speech that explored all the advantages of the greater political union between Scotland and the rest of the United Kingdom.

Selecting his target audience for this speech was always going to be tricky. Already this week we’ve heard of Scots feeling “bullied” over the pound sterling. Remarkable.

So, avoiding such perils, the Cameron speech aimed itself at the rest of the United Kingdom. He took the medium of a position taker to get his points across:

There are those I’d call the ‘quiet patriots’ – people who love the United Kingdom, love our flag and our history, but think there’s nothing much that they can do to encourage Scotland to stay in the UK, so they stay out of the debate.

Then there are the ‘shoulder shruggers’ – people who are ambivalent about the outcome, who think this doesn’t matter much to anyone south of the border. Their view is that, if Scotland left the UK, then yes, that would be sad, but we could just wave them a wistful goodbye and carry on as normal.

And then there are those – only a few – who think we’d be better off if Scotland did leave the UK; that this marriage of nations has run its course and it needs a divorce.

Now, today I want to take on all these views.

The Cameron speech proved particularly rich in rhetoric. Beyond the position takers there were “not this, but that” rhetorical devices:

And it’s not just a plan; it is a vision.

And there was metaphor. We are growing used to metaphor when it comes to the economy. And the Cameron speech didn’t disappoint here:

This is a world that has been through massive economic storms,

But with everything else happening in this speech we also suspected that the Prime Minister’s speech writing team had also peppered the Cameron speech with well-known song lyrics. Just a thought, since we found a Dionne Warwick reference with:

When the people of Benghazi were crying out for help, when a girl in Pakistan was shot for wanting an education, when children around the world are desperate for food or for aid, we don’t walk on by.

Or how about an Arctic Monkeys reference?

Or how about Rihanna’s, I want You to Stay: