We have already documented Bill Clinton’s success on the public speaking circuit. But the scale of that success might be surprising to some Because there’s no doubt that Bill Clinton speeches are pulling in the dollars like never before. 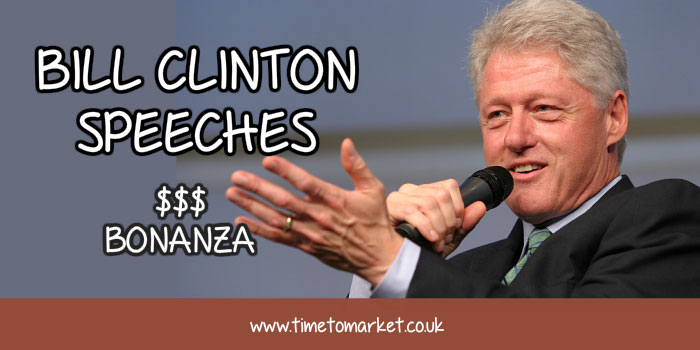 Bill Clinton Speeches are Pulling In The Dollars

We considered some figures for his public speaking in July last year. And that made some good reading. Because the former President is a very successful public speaker. This year the analysts at CNN have trawled through all the public revenue figures for all the Bill Clinton speeches since he left office in 2001.

They estimate that Mr Clinton’s speeches have earned more than US$ 100 million in the years since his two terms in the White House. In 2012/ 2013 alone the former President gave 73 speeches for US $17 million. Bonanza.

This latest disclosure about his earnings on the speaker circuit came as a result of a public filing given by Hillary Clinton after leaving her post as Secretary of State. And that could well be the last we see of his earning power. Unless, of course Hillary Clinton again runs for federal office. Or, perhaps if she is appointed to a public office.

US $106 Million For Bill Clinton Speeches

Averages tell only some of the story. In the 12 years after he left office Bill Clinton delivered 544 paid speeches and earning an average of US $195,000 per event. But it was his overseas public speaking that really got the dollars rolling in. For example a speech in Lagos, Nigeria last year generated US $700,000. Speaking in 54 countries over the 12 years earned Mr Clinton US $57 million. That’s more than half of his public speaking total.

His most popular foreign destination was a simple hop across the border to Canada. His second favourite destination was the United Kingdom. And then he also liked public speaking engagements in Mexico, in third place.

The former President has set an incredible work rate. But Hillary Clinton will aim to emulate her husband’s record. Her public speaking mission might take a more tactical direction as she prepares for a chance at running for President herself. Undoubtedly she will need to fill campaign coffers ahead of such a campaign. So she will also need to woo various interested parties in readiness.

If you plan a public speaking campaign you can always get ready with public speaking skills training or coaching. You can join a scheduled course or choose your own personal coaching sessions.  It’s your choice. Please do not hesitate to get in touch.