Proves His Worth On International Public Speaking Circuit

It’s a question that we’ve asked before. And no doubt it’s one we’ll ask again. What is the mark of a successful public speaker? Is it an engaged and enthralled audience? An audience that’s visibly moved or stirred? Or is it an audience that changes because of someone’s speech? That’s the sort of answer we’ve come to expect. 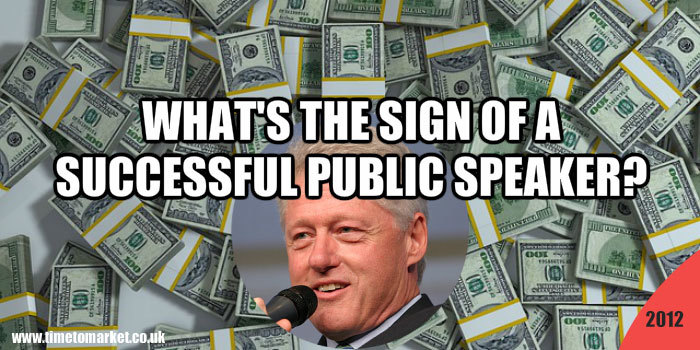 But former President Bill Clinton has established a new mark of success.

During 2011 his paid public speaking engagements–all 54 of them–earned him $13.4 million. That’s a massive increase on his 2010 public speaking income of $10.7 million for 52 paid speeches.

Other Presidents have done well from their public speaking after leaving office. But the scale of their commercial speaking success has remained unquantified…or only guessed at. Public speaking George Bush keeps his speech earnings very private.

The difference is Hillary. Being married to Secretary of State Clinton means that Bill is obliged to disclose his earnings from the speaker circuit. And what earnings they are.

Nearly half of his fee income was earned overseas in a variety of cities including Hong Kong, Shanghai and Lagos.

So, his popularity as a speaker is clearly growing. Because he’s made speeches in 52 countries, grossing $51 million in the process. That’s an international flight plan nearly on a par with that of a Secretary of State.

President Clinton has clearly achieved a financial mark of success with his speeches. But that success is built on him being an engaging and captivating speaker who delivers, whether it’s a paid or a non-paid event. Just look at the Bill Clinton Yale speech to see that.

You can read, listen to and watch a whole series of public speaking tips with Time to Market. And when you want to become a successful public speaker yourself you can always consider courses or coaching to help you. Please don’t hesitate to get in touch when the time is right.