No Hat, But A Head For Figures

President Clinton gave the Class Day Address at Yale University last weekend. He was clearly very taken with the sartorial headgear splendour of the new Yale graduates, noting how the Secretary of State’s phone call the previous night hadn’t prepared him at all. That note allowed him to express his thanks to Yale–not least for introducing him to Hillary Rodham in the 1970s. So the stage was well set for this Clinton Yale speech. 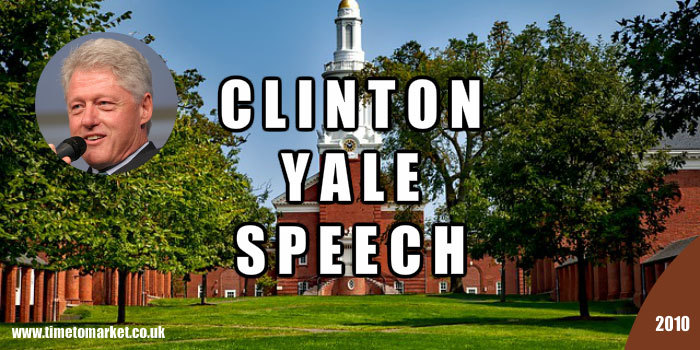 But his speech didn’t begin with anything close to an outline or structure. Yet there was structure afforded by a series of interconnected thoughts…and long, long pauses. So, it required listening.

A central theme to his speech were the common elements that we all share. Combining seriousness with jocularity, he referenced the human genome project–a project on which “I spent your family’s taxes.” He noted how similar we are to one another. Yet, despite these similarities, most people dwell on the differences.

This theme allowed the former President to discuss other inequalities in the world. So, he compared an education at Yale to a non-education in many other parts of the world. And then he compared and contrasted health and mortality inequalities. Statistics and figures supported his every point. Because he’s very much at home with figures.

Via instabilities he arrived at climate change where he referenced the civil rights leader Martin Luther King. It was Dr. King who used to quote Victor Hugo.

“There is nothing so powerful as an idea whose time has come.”

And he contrasted this with some of the climate change naysayers:

“There is nothing more destructive as an idea whose time has come and gone and people just won’t give it up.”

His proposal that a serious commitment to tackling man-made climate change would reduce inequality, start an economic boom, stabilise our future as well as deal with the sustainability issue was well-received.

A sweeping, yet probably accurate statement followed. All the wrongs of the world are determined by inequality, instability and non-sustainability. Yet, the big question for all the Yale graduates in the next 20 years will be how you tackle these problems? His answer:

Neatly this brought President Clinton back to the human genome project. You, the graduates of Yale, have been very fortunate with your genetic make-up. Aim for public good. You can’t have winners and losers. Everyone has to win in the 21st Century.

Wanting to finish on an optimistic note he observed:

“Make it better together.”

It was a wide-ranging speech by an accomplished speaker. Timed at just over half an hour it accomplished everything for which it was intended.

You can read plenty of public speaking tips with Time to Market’s series of tips, podcasts and videos. And, when you are ready to give your public speaking skills a real boost, then please don’t hesitate to call us about training and coaching.

Previous Post Bush Speech: Texas, Wind and Me Next Post Maiden Speech For Caroline Lucas And The Greens