Bush Speech: Texas, Wind and Me

President Bush gave the keynote speech at the American Wind Energy Association (AWEA) conference in Dallas, Texas yesterday. In stark contrast to former times, the Association’s members were politely reminded that microphones, cameras and video cameras were prohibited during the the President Bush speech and the subsequent questions. A very private speech from the public speaking George W Bush. 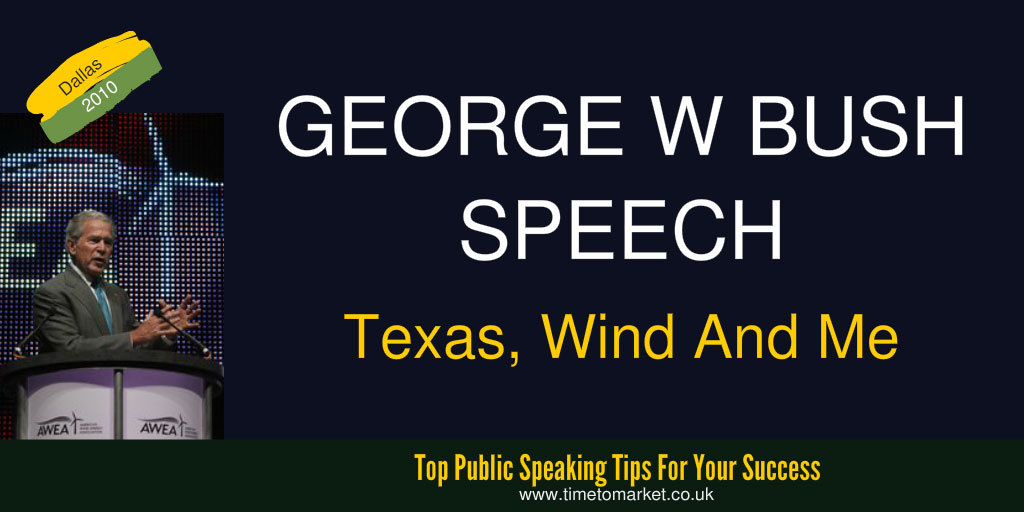 President Bush Speech At The AWEA Convention In Dallas, 2010

However, the President was on sparkling form. And he certainly appeared well-rested after leaving office. So, this George Bush speech did not set out a grand vision for renewables, let alone wind energy. Because, that’s now the job of others.

But in reminding his audience that he, as Governor Bush,  signed the Texas renewable portfolio standard in 1999, he noted the long-term trend for renewable energy. And, he also placed a focus on Texas as the country’s leading wind generator State. Yes, with three times as much capacity as the second State, Iowa. That’s not an observation that many of his European detractors would be aware of. But it was a gentle reminder that politics is typically a lot more complicated than it might appear to outsiders. And, of course that’s something to ponder when you consider speeches like the Chris Huhne conference speech.

Indeed the President, under questioning by the Association’s President, did reveal that his Crawford ranch farmed its rainwater and made good use of geothermal energy. Quite something for a non-signatory of the Kyoto Protocol.

Questions Proved A Hit In This Bush Speech

In fact it was the question and answer session in which his audience had the chance to see the real George Bush:

You can always discover public speaking tips with our series of tips for speakers and presenters everywhere. So, when you want to discover a new energy source for your next speech, please take a look. Or, perhaps find out how to handle questions. Plus, when you want a more intensive focus on your own public speaking skills, then why not consider some training? Because a well-time training session might prove just the ticket for your own success. So, when the time is right, please don’t hesitate to get in contact.