A mercifully short Donald Tusk speech at the College of Europe in Bruges really is something to acclaim. Not least because as the President of the European Council he's due to retire on November 30. But also, more prosaically, because his short speech is something different from other European Union potentates. 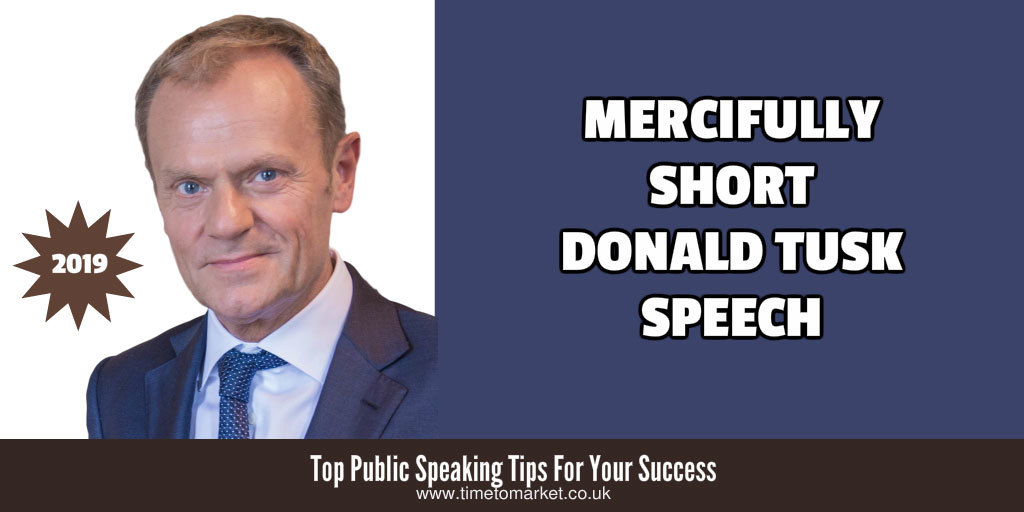 Typically their speeches can stretch beyond your ability to focus and stay attentive. Certainly that was the case for the former President of the European Commission, José Manuel Durão Barroso. Now, he really could talk. His final lengthy EU speech was a 9,000 word epic. And an epic that his audience had to endure for 75 minutes or so. Now, that's a sacrifice.

Equally heavy-weight was an epic goodbye speech from the former head of the European Central Bank Jean-Claude Trichet. This Trichet Euro speech was simply dense, beginning with a 22-word sentence, followed by a 39-word sentence and then a 28-word sentence. Now, that really was some beginning.

So the 2,900 word short Donald Tusk speech is clearly a comparative minnow in the European Union pool. Yet his introduction was more than good as it praised Bruges and also three European women women who have meant much to Mr Tusk over the years. Because how you start your speech really does matter. Even for President Tusk.

When I heard that this year's College of Europe promotion was dedicated to Hannah Arendt, and that I was invited to inaugurate the academic year, I was more than happy for two reasons. Firstly, because Arendt is an intellectual heroine for me. And secondly, because we are in the magnificent city of Bruges.

However, it's clear that President Tusk is winding down to his retirement in only a few weeks time.

Finally, if you allow me, I want to tell you something I wouldn’t have dared to say a few months ago, as I could be fired for being too frank. And today, it is simply too late to impeach Donald, at least the European one. In fact, I envy John Bercow, that he can finally, honestly say what he thinks about Brexit.

Touching. Retirement beckons and he's ready to speak honestly and openly. If only it was always thus. Because he then made clear his own personal wish.

The UK election takes place in one month. Can things still be turned around? Hannah Arendt taught that things become irreversible only when people start to think so. So the only words that come to my mind today are simply: Don’t give up. In this match, we had added time, we are already in extra time, perhaps it will even go to penalties?

When you want to speak openly and clearly then you will always find good public speaking tips here. Because our regular series of tips for speakers and presenters is just the ticket for someone wanting to boost their own skills. And, when you are ready to grow your public speaking skills that bit further, then why not consider a coaching session. Because a well-constructed skills training intervention will do wonders for your skills and confidence. So, when the time is right, please don't hesitate to get in touch.