After eight years as head of the European Central Bank Jean-Claude Trichet has bowed out with a speech to an exclusive audience of European dignitaries. His departure comes in the middle of the current financial crisis in the Euro area. And that crisis featured heavily in this heavyweight Trichet Euro speech. 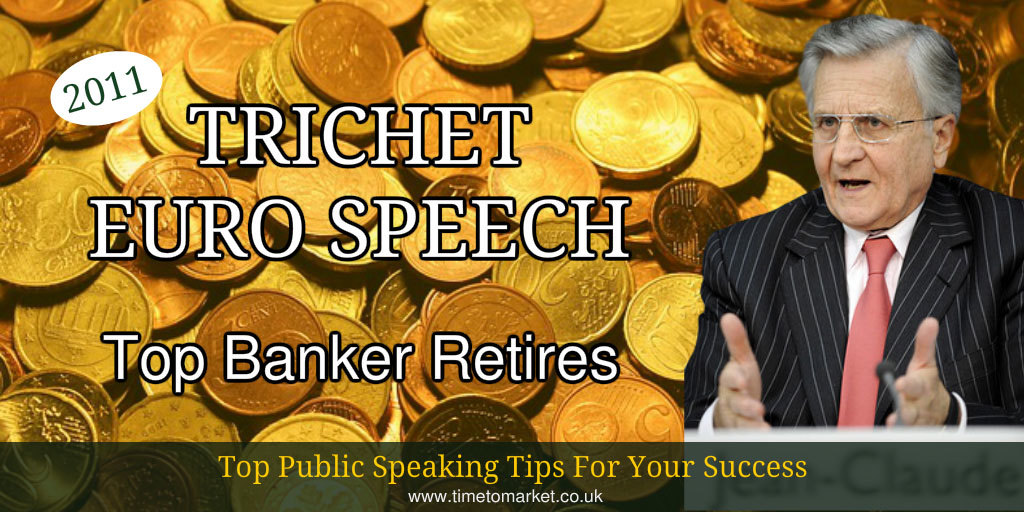 Jean-Claude Trichet Euro Speech Marks His Retirement From The ECB

The beginning of his retirement speech was definitely heavyweight. Because he wanted to put the achievements of the Euro area into a broader perspective his first three sentences were long. So impenetrably long and littered with conditional clauses. He began with a 22 word sentence, moved on to a 39 word sentence and then adjusted to a 28 word sentence. Heavy stuff and he’d hardly got going. Yes, these were the first three sentences of the Trichet euro speech. It’s probably too late for Jean-Claude Trichet, but how you start your speech really does matter.

It did get better. But sentence length remained an issue throughout. Given the heavyweight nature of his audience that was probably not a problem. But the merits of this Trichet speech will not travel much further. In that, his euro speech is comparable, albeit shorter, to the lengthy EU speech of President Barroso.

He’s fond of quotations. So, the Trichet euro speech bristled with the quotations of Jean Monnet, Johann Wolfgang Goethe and Alcide De Gasperi. So, we heard:

‘Continue, continue. There is no future for the people of Europe other than in union.’

‘The most important factor, which must prevail on others, is the political will to build the Union.’

Ah, the merits of selective quotation to further the cause of monetary union. Still, his audience included former President Giscard d’Estaing and former Chancellor Helmut Schmidt. Thus, such enthusiasm was entirely natural.

But how about some public speaking gobbledygook? Because beyond the impenetrability of many of his sentences, this Trichet speech was also marked with that mangled style of linguistic complexity that’s the preserve of the European Union:

Can you really argue against that? How about:

You’ll need to say it to yourself a few times before it sinks in, which makes it the perfect place to stop this Euro speech. Farewell then Jean-Claude Trichet.

You can discover lots of top public speaking tips with our series of top tips for public speaking and giving presentations. And once you’ve discovered more than 100 tips, you should find something for every speech occasion. Plus, when you want to give your own public speaking confidence a boost, then why not consider some training? Because a well-planned course will always boost your confidence and public speaking skills. So, when the time is right, please don’t hesitate to get in contact.