Was it only in July that the Prime Minister, Theresa May, made way for a Tory party successor? Because it really seems longer. That’s just the mad state of British politics today. But Theresa May is back in the headlines this week, not for her Grenfell speech in the Commons, but for her potential speech income. And that’s all as a result of the Washington Speakers Bureau. Because they’ve signed her up for corporate events and keynote conference speeches. 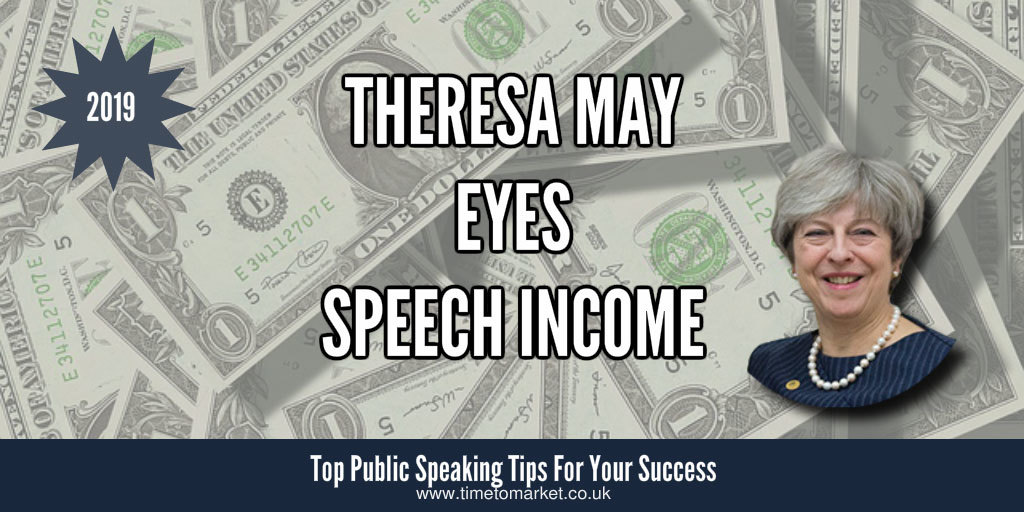 A New Speech Income Beckons For Theresa May

But all this speech income is dwarfed by the public speaking fees of successful public speaker Bill Clinton. Truly enormous speaker fees. And of course the Hillary Clinton speech fees have also proved very extensive.

So it’s no wonder that various public speaker bureaus are so keen to sign up former Presidents, Prime Ministers, Secretaries of State or Chancellors of the Exchequer. Since there’s a worldwide market out there for their thoughts and opinions…even for Boris Johnson speeches.

But despite the enthusiasm of the Washington Speakers Bureau, public reaction was very reserved. Could the former Prime Minister really cut it as a paid public speaker? And generate a decent speech income?

If Theresa May can get a gig as an inspirational speaker then my dream of winning the Olympic decathlon lives on.https://t.co/4XtDWaxcw0

And of course much of this priceless reaction is the result of the 2017 Theresa May conference speech nightmare. Since it really didn’t put the public speaking Theresa May in a favourable light.

However, I’d urge you not to put too much score on that one speech, let alone the somewhat wooden appearances at others. Because you can’t doubt that she has the necessary skills and experience to be on the keynote speech circuit. She really should be able to bank all those years as a Minister to build her speech income on the circuit. And should she choose themes that reflect fortitude and resilience then I’m sure that she will be a bonus as an inspirational speaker.

When you need some good solid public speaking tips then you can do worse than scour the 100 top tips for speakers, podcasts and videos on this website. And, when you feel the need to give your own public speaking skills that extra bit of emphasis, then please don’t hesitate to get in touch.

Previous Post Jeremy Corbyn Campaign Speech Has Trumpian Echoes Next Post It’s Not What You Say, But How You Say It