An English speech by President Putin aimed to boost support for Russia’s bid to host the Expo 2020 exhibition. He gave his speech in English, directed at members, delegates and guests of the International Exhibitions Bureau, from one of the Kremlin’s ornate reception rooms. 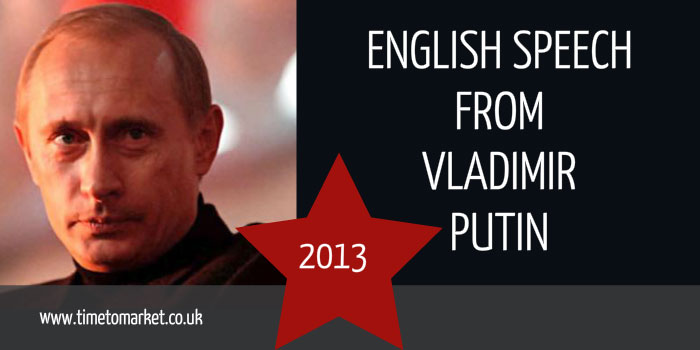 Speaking direct to camera, his speech made the case for Russia to host the 2020 World Exhibition in Russia’s fourth largest city, Yekaterinburg.

His command of the English language is probably not enough for him to give the speech without a teleprompter or autocue. But let’s remember that he does also speak German. So, that’s not a bad score for languages.

His speech made the point that Russia attended the first World Expo in London in 1851 and won a gold exhibitor’s medal at the 1900 event in Paris…but, to date, has not had the privilege of hosting the event. Now is the time?

The speech made clear his resolve that Russia should be successful. Perhaps that was why he gave his speech in English–choosing not to rely on a translator or subtitles? That gamble might pay off as he appeared sincere with his ambition to host the Expo. Certainly the detail of the speech also supported favourable inducements for others to support the Russian bid. That’s probably as important as an assured speech when it comes to these events.

Now, once again, I would like to make this very clear: Russia guarantees to fulfil the complete range of requirements set by the International Expositions Bureau.

This wasn’t his most self-assured speaking performance. Not dissimilar to the Duchess of Cornwall’s French speech in Paris earlier this month, giving a speech in a foreign language requires nerve and attention to detail. And that’s particularly so when you are not that fluent. But, it’s an impressive skill nonetheless.

When you need to give an English speech you can always organise a one-to-one coaching session beforehand. This coaching day aims to give you the skills and confidence you need at any public speaking event. Please don’t hesitate to call.