It's fair to say that UKIP Leader, Nigel Farage, had a personal wobble after the May General Election. Because his resignation, un-resignation, and being asked to come back all took their toll. On him, other party leaders and UKIP in general. So this was the focus at the start of the Nigel Farage conference speech today at the UKIP conference in Doncaster. 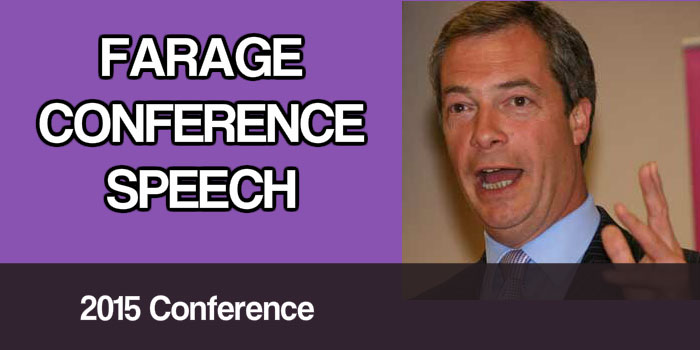 Of course it wasn't the best way to begin a barn-storming speech. But it was honest.

Common to most politicians, Mr Farage is fond of repetition.

On many different areas of our national life.

On welfare – that benefits should be there for need, not as a lifestyle choice.

On education – that grammar schools are a great engine of social mobility.

And yes, on the European Union.

This proved to be a wide-ranging speech. Just about every politician was in Nigel's sights. There was a dig at Nicola Sturgeon. Then, a dig at David Cameron, and finally a dig at his perennial favourite Jean-Claude Juncker.

Even Tony Blair and Peter Mandelson received some opprobrium. But his best lines were dedicated to the new Leader of the Labour party.

I think Corbyn is a gift for UKIP

When he reached the end of his speech his oratory became bolder with an excellent position taker. He then followed this with a series of "not this" statements.

There are those who say we can’t go it alone. That our global influence will decline because we are small.
Those are the true voices of Little England. We speak for Great Britain.
No longer bound into an ageing and increasingly arthritic trade bloc where growth of 2 and 3 per cent is an ambition.
Instead, the world. The Commonwealth. Trading with Brazil, Asia, the Commonwealth where growth rates in double figures will bring wealth back to this country.
No more relying on debt-fuelled booms to get things going.
No more growth through credit card excesses.
We earn our way to national prosperity by free trade with the world.

So, not quite a barn-stormer, but this proved a well-crafted "impromptu" speech of just under 30 minutes from an experienced speaker. Speaking without notes Mr Farage clearly benefited from the podium choreography...a rousing welcome and the soundtrack, "The Final Countdown" by Swedish band Europe!

But, more importantly, he clearly benefited from the rapturous, raucous audience that is a UKIP party conference.

You can learn all about successful beginnings and endings for your next conference speech with a training course from Time to Market. We can organise your training at one of more than 40 off-site training centres. Or, we can organise a tailored corporate event at your offices, for your team, perhaps. When you are ready, you can always give us a call.