It's fair to say that some of the media performances by Natalie Bennett before the General Election were a bit weak. Probably unnerved by the level of interest in her party and their policies, she managed to appear both unprepared and unrehearsed. So this Natalie Bennett speech in Bournemouth was always going to be in the spotlight 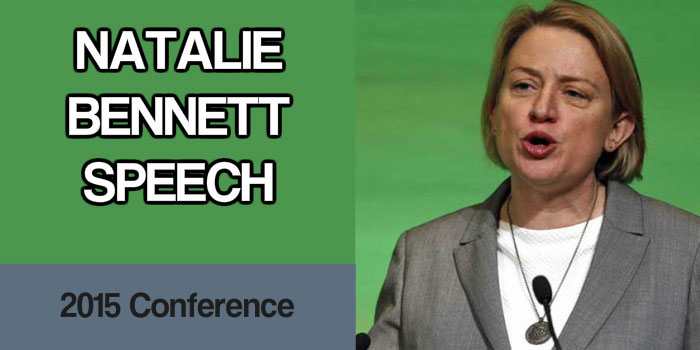 All that attention is probably unfair. But it is the price you have to pay if you are to lead a national political party.

So how did she do with her conference speech? Well, it was okay.

But her speech was rehearsed and she was prepared. Yes, there were some stumbles. But that's not really an issue.

Technically, she chose to use auto-cue. And that must have boosted her confidence. I'd suggest, however, that the auto-cue be raised for her next speech. She appeared to look down to read the text. And that clearly misses the point of using auto-cue.

In her speech she referenced other figures from contemporary and older history. So, she mentioned Abraham Lincoln. And she also mentioned Al Gore and Pope Francis. This is a neat technique that she can improve with some more passion and timbre in her voice.

The conclusion of this Natalie Bennett speech adopted some well-used repetition to get her audience going.

If you believe that Britain should not be bombing Syria, following the failed policy that's had such disastrous consequences for the people of Iraq and Afghanistan – join us and fight for change.
If you're a parent who cares about your children's and grandchildren's future – join us and fight for their future, fight for a liveable planet.
Politics should be something you do, not something done to you.2015 can be – must be - the start of the century of Green politics.
Let's get together and make it happen.

It wasn't exactly Kipling. But, Natalie Bennett clearly has some speech writing assistance on board at the Green party. It's another sign that the party is beginning to gain some traction.

Of course, you can always get in touch when you need some help, ready for your next conference speech. We can help with one-to-one coaching or a refresher designed to boost your speech rehearsal. So, when the time is right, please don't hesitate to call.