When you think of an acceptance speech you might think of a victor and perhaps the losers. Or you might think of a splendid, joyous occasion. Almost certainly, you'll think of the all-important audience and their reaction to the acceptance or victory speech. And, of course that's why the Sir Keir Starmer acceptance speech this morning is so different. Simply bizarre. Because his victory speech was pre-recorded without an audience, to a backdrop of drawn shutters. Closed for business. That's the covid-19 crisis for you. And the manner of this speech is only an insignificant casualty. 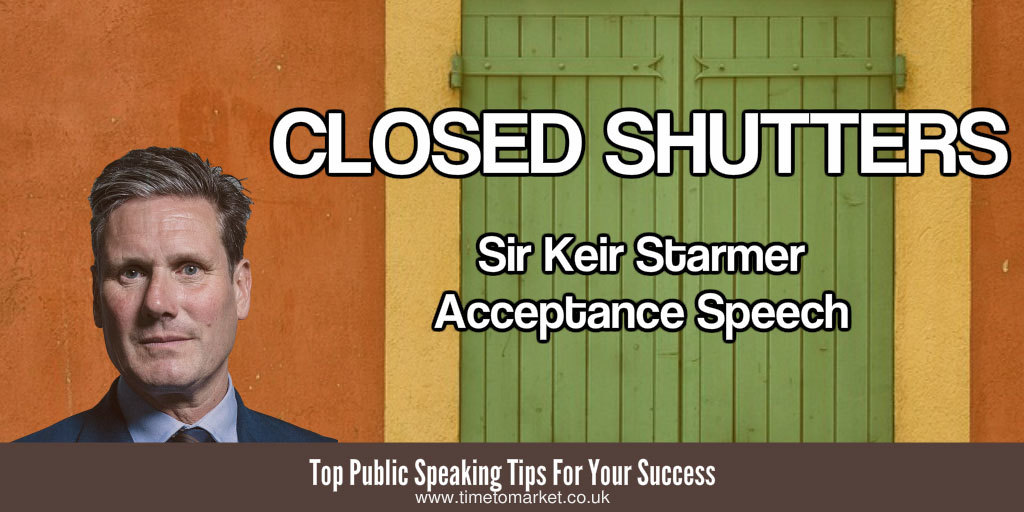 We've given tips before on how to give a victory speech. And, despite the covid-19 crisis they remain pertinent to this acceptance speech from the new leader of the Labour party.

Brevity Is Best For Any Acceptance Speech

His speech was relatively short. But we can only guess how much longer it would be if it was punctuated with applause and a standing ovation at its conclusion. Who knows?

So the Keir Starmer acceptance speech lacked the immediate drama of party conference when Ed Miliband became Labour leader. And it certainly lacked the PowerPoint presentation prequel provided by Ann Black. But, that's self-isolation and social distancing for you.

And the speech itself? Well, it was short, and that's always a positive. And in that respect it was similar to that of Ed Miliband's speech in 2010, albeit without the applause points. And, of course, it was also familiar on account of its plea for party unity.

We must go forward with a vision of a better society built on that resilience and built on that human spirit. That will require bravery and change in our party as well.

Sir Keir Is In No Hurry With This Speech

Sir Keir Starmer remains a slow and steady speaker. We noted this in 2017, when we asked what is a good speed for a speech? That was because his 2017 conference speech was inordinately slow at 80 words a minute. Perhaps he will work on this?

His speech also contained all the right scoring points, thanks to everyone and his fellow leadership contenders. Faultless.

I want to thank Rebecca and Lisa for running such passionate and powerful campaigns and for their friendship and support along the way.

I want to thank our Labour Party staff who worked really hard and my own amazing campaign team, full of positivity, with that unifying
spirit.

I want to pay tribute to Jeremy Corbyn, who led our party through some really difficult times, who energised our movement and who's a friend as well as a colleague.

And to all of our members, supporters and affiliates I say this: whether you voted for me or not I will represent you, I will listen to you and I will bring our party together.

However, the backdrop to this Keir Starmer speech remains the most obvious pointer to self-isolation. Normally we can anticipate a good conference backdrop of Labour party red, stirring graphics or beaming voters nodding in support. But not this time. Yes, backdrops and staging can be tricky. The Theresa May conference speech nightmare of 2017 and the missing Presidential seal at the Barack Obama speech point to the pitfalls.

But drawn shutters? Closed shutters? Shutters down for business? It really does send out all the wrong ideas for visual imaging. Still that's the covid-19 crisis for you. It's all change.

When You need public speaking tips and techniques for your next public speaking outing, you'll find them here. And with more than 100 tip tips for speakers, there's something for every event. Plus, when you are want to seriously get ready for a speech, you can always ask us about some coaching or training…when we are allowed out, of course. So, please don't hesitate to get in touch.