There really is something quite dispiriting with the latest Sir Keir Starmer Covid speech. Yes, it's not a bad little speech, timed at 17 minutes. But, there is no audience. There's no mood and no atmosphere. And that's important, with a speech. And it's particularly important for a new Party Leader. Yes it was only in April last year that we covered his acceptance speech. 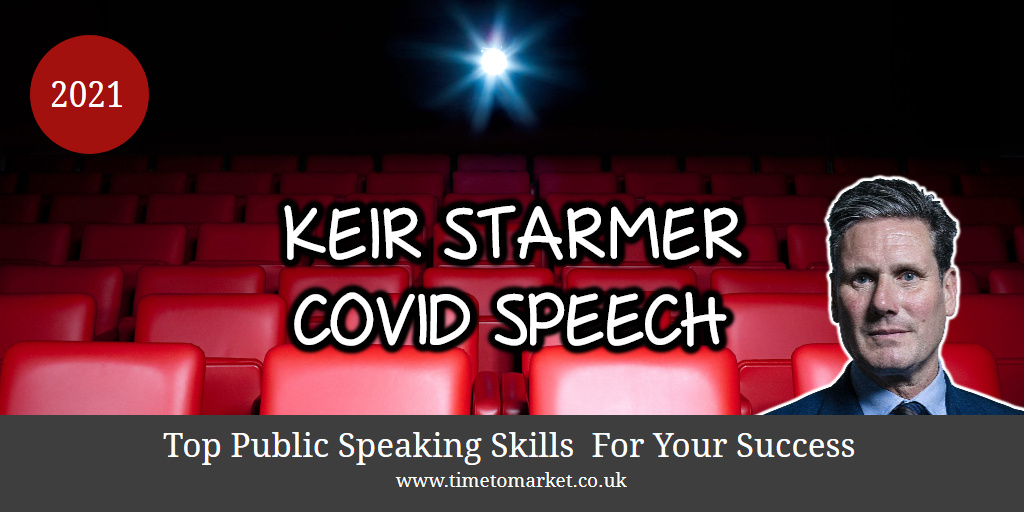 Sir Keir certainly manages to spoof the art of giving a speech to an audience. Yes, there's a lectern. There's a half-decent backdrop. There's a microphone. He's even got notes and a glass of water on the lectern. And then, in terms of his speaking, he's got all the necessary hand gestures. To an extent, he even looks animated. Because he Isn't rooted to the spot gazing at the camera. That's of course unlike many people on a zoom conference call.

So beyond the ludicrous staging for this Sir Keir Starmer Covid speech, how was it? Well, let's put the politics to one side. It wasn't bad, albeit we might well take issue with the reedy tone of his voice.

We heard a passable attempt at a phrase reversal, which is a very popular technique with a range of political speakers.

Even in the best of times, you can’t be indecisive in government. In the worst of times, indecision can be fatal.

We also heard some good use of repetition.

Every time there’s a big decision to make, Boris Johnson gets there too late.

He was too slow to lock down in March of last year.

Too slow to protect our care homes.

“Too slow to save jobs and businesses.

And too slow to get protective equipment to the front line.

And Sir Keir is also quite fond of word pairs. And why not? Because they were a favorite technique of the great communicator, Ronald Reagan and his speech writers such as Peggy Noonan.

As we start the new year, we need a new approach.

But, overall it was the pleading tone that grated in this virtual speech. Yes, it reminded us of Ed Miliband and his speaking style, such as this 2012 New Year speech.

Yes, there were one or two misspeaks. But that's not a problem. Most speeches have them and most speakers come across such situations when reading a script. Just think of Dr. Martin Luther King's "I have a Dream" speech or Tony Blair at the Labour Party conference in 2001. It happens.

We heard some use of metaphor. Perhaps not as much as we might have expected with a political speaker. But nonetheless, there it was. Certainly if you want revolutionary fervour in your speech metaphors then a Comrade Xi-Jinping speech is a good place to look.

There will be hard months ahead. But the seasons will turn.

A dark winter will give way to a brighter spring, and when it does, I know that together we can build a better future: a country worthy of the sacrifices of the British people.

He made good use of history within this speech, referring to the post-war Clement Attlee government, and all that came after it.

“Just as we did in 1945 when Attlee’s government built the welfare state from the rubble of war.

When you need some speaker inspiration for your next speech, history is typically a good place to look.

If there was one major challenge it was when he took questions at the end of his brief speech. His first questioner was, Laura Kuenssberg, from the BBC. She spoke on the adjacent screen. And then Sir Keir turned his back on his audience to face her image.

Now, we always recommend that when you answer a question, you address the questioner. But we certainly don't expect you to turn your back on your audience. So that was a problem for the production side of this particular speech. However, on the whole, despite this being a virtual Sir Keir Starmer Covid speech, it wasn't too much of a burden.

When you need public speaking tips in general or advice on how to handle audience questions after your speech, then you'll discover more that 100 top tips right here. Plus, when you are ready for more intensive training, we've got the right training courses for you.