Tackling emotive issues in your speeches might win you plaudits in some quarters. But there’s the probability of reservations in others. That has to be the case for this Ed Miliband immigration speech. It received an equal measure of both. 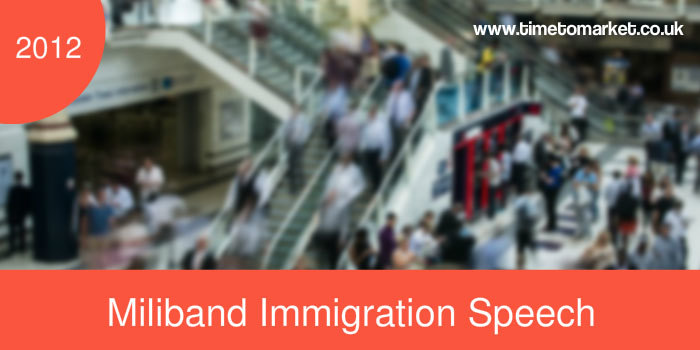 His speech at the Royal Festival Hall, with the Institute of Public Policy Research faced up to the hard task right from the start.

The debate we must get to is a grown-up debate, informed by the facts, serious in intent, and conducted in a candid way.

This is an incredibly hard thing to achieve.

It’s hard, certainly. But he got through it with a very simple device. A device that’s impossible to argue against:

So let me start with a basic truth.

Britain must control its borders but it must always face outwards to the world.

A bit of everything there for everyone!

The speech showed he’s an enthusiastic user of repetition as he plots his way through his argument:

As on everything else, our approach must be consistent with the kind of country we want to build.

A country with an economy that works for working people, not just a few at the top.

A society in which everybody has a shared sense of responsibility, both for ourselves and each other.

And a politics where everyone’s voice is heard and in which we only make promises we can keep.

His speech was characterised by short, slightly breathless sentences. There’s a listing style to this section:

I have good reason to know this.

My father came to Britain in 1940, escaping from the Nazis.

The country took him in.

Britain gave him a chance.

He served in the Royal Navy.

The David Miliband immigration speech acknowledged the problem with bigotry in earlier Labour arguments. That was a swipe at the previous party leader. But his speech also gave a nod towards a 2001 speech by Tony Blair:

I know that here in Britain people are anxious, even a little frightened. I understand that. People know we must act but they worry what might follow. They worry about the economy and talk of recession. Tony Blair.

They worry about immigration.

They worry it might make things harder rather than easier for them and their kids.

Not in any way.

When he finished this half-hour speech he returned to his introductory argument:

This is the approach that will make Britain the confident and outward looking country I want us to be.

So, a neat ending to a difficult speech.

You can always discover more tips for public speaking with our regular series of tips, podcasts and videos. We hope that you don’t need to prepare for an apology speech, but you should find some help. And, when you are ready to give your public speaking skills a further boost, then please don’t hesitate to get in touch. Because we have the courses and coaching sessions to make a real difference with your public speaking.