Amid all the fanfare, pomp and ceremony of the wedding of Prince William and Catherine Middleton we have the marvellous news that Prince Harry’s Best Man speech was leaked to the press. Only it wasn’t! 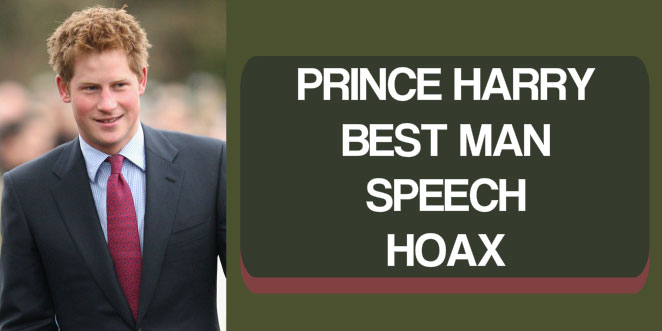 The fake Best Man speech story, promoted by a Leeds-based public relations business Ptarmigan Bell Pottinger, involved a fake e-mail, a student, a web site, the Best Man speech itself  and a purported apology. So, all the precise ingredients needed for an insatiable world media gorging on Royal Wedding stories. Perhaps the only missing item was a telephone hacked voice-mail message. But that might have proved too topical.

Fortunately for everyone concerned the spoof became clear. But only once a host of news services worldwide picked up the story.

Ptarmigan Bell Pottinger’s client is Article 10, the presentation services group. They are clearly delighted with all the publicity. Money well spent.

So could the 300 plus guests at the Buckingham Palace dinner this evening really be in store for a Best man’s speech that includes a line of gags and revealing stories about the second in line to the throne?  It’s a distinct possibility. But risque one-liners borrowed from Grandpa Prince Philip? Perhaps not.

We know that the Queen and Prince Philip are not there, opting instead for a quiet night at Windsor Castle. Age has its privileges. And we also know that Prince Harry likes a good prank. As does his father, Prince Charles, the host of tonight’s dinner.  So the scene could be set for a speech that doesn’t prove too embarrassing for grandparents.

Whatever Prince Harry says in his Best Man speech I hope that it’s kept private. That’s because each Best Man’s speech should aim to be personal, private and revealing. But only revealing to those that really know the groom. And most of us don’t.