Queen’s Speech Proves A Blast From The Past

The National Archive in Kew typically proves a rich treasure trove of 30 year old political material every August. Just as everyone’s off on holiday. How convenient. This week it’s a speech that’s turned up with the passing of the 30 year time lapse. The speech in question is one that was written by civil servants and would have been given in the event of a nuclear war breaking out…by Her Majesty the Queen. The Queen’s speech of 1983. 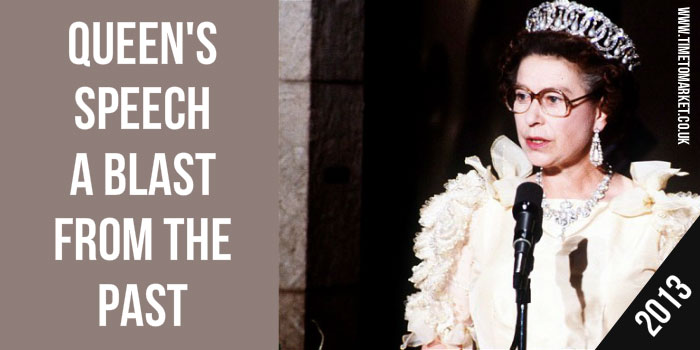 Queen’s Speech Proves To Be A Blast From The Past. Literally.

This Queen’s speech of course would have been a bit different. Given the horror of a nuclear strike we might expect it have been rather short. Quite so.

Our brave country must again prepare itself to survive against great odds. I have never forgotten the sorrow and pride I felt as my sister and I huddled around the nursery wireless set listening to my father’s inspiring words on that fateful day in 1939. Not for a single moment did I imagine that this solemn and awful duty would one day fall to me.

The archives suggest that this speech was written to add realism to a complex Armageddon scenario planning exercise–Wintex-Cimex 83. An exercise undertaken by civil servants as fears of a nuclear threat grew during 1983.

The language in the speech certainly sounds strained. And we can expect that the speech itself never went anywhere near the Queen herself or her staff. The style, tone and context just doesn’t fit with, for example, the Queen’s speech at Christmas. Still, it remains the August silly season for news.

When you need to work on a draft of your next speech why not consider a one to one public speaking coaching session? You can take the time to refine and perfect your speech, away from your desk. Plus, you can expect some solid critical feedback as you work through the day. Please don’t hesitate to get in touch.