Security Conference Speech Sets Out A Vision For UK

Munich Speech From Theresa May

You can't deny that Theresa May is under considerable pressure. But she managed to appear confident and in control with this MSC 2018 security conference speech in Munich, Germany this morning. Her speech comes only a day or two after that of her colleague, Boris Johnson. And whilst the Foreign Secretary gave a reconciliation speech brimming with vision, the Prime Minister chose security. 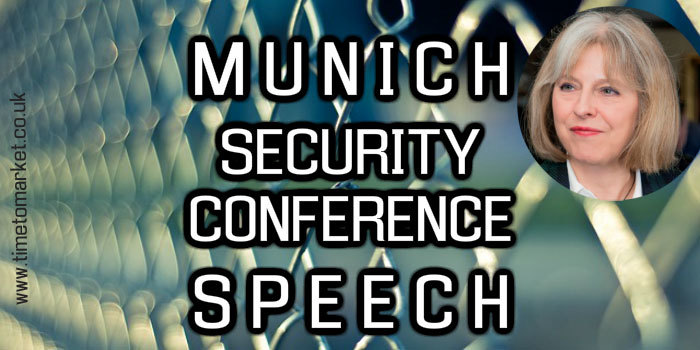 Security Conference Speech From Theresa May In Munich

However, that's probably a wise choice. She was the Home Secretary for five years and, before then was Shadow Home Secretary whilst in the opposition. So it's a subject that she knows as well as any politician.

And her speech certainly worked. She's still not the most passionate of speakers, and she probably will never be so. But she's competent enough to give such a keynote speech that's been trailed in the media for several weeks.

Reading from a script on the lectern, she started her speech with a date. And that's a fairly typical way to begin such a speech. In fact, it's a real favourite for politicians and business speakers alike.

For more than half a century, this conference has brought nations together from Europe and across the Atlantic to forge our common security.

She gave her security conference speech in a firm and steady fashion. Quite the opposite of her unfortunate conference speech nightmare in the autumn. And while her style remains more stoic than variable, she isn't afraid of rhetoric.

That is why we are the second largest defence spender in NATO, and the only EU member to spend 2 per cent of our GDP on defence as well as 0.7 per cent of our Gross National Income on international development. And it is why we will continue to meet these commitments.

It is why we have created a highly developed set of security and defence relationships: with the US and Five Eyes partners, with the Gulf and increasingly with Asian partners too.

Purpose To This Security Conference Speech

But she wasn't about to let rhetoric get in the way of her overriding purpose with this speech.

So as we leave the EU and forge a new path for ourselves in the world, the UK is just as committed to Europe’s security in the future as we have been in the past.

Europe’s security is our security. And that is why I have said – and I say again today - that the United Kingdom is unconditionally committed to maintaining it.

These people don’t care if they kill and maim Parisians, Berliners, Londoners or Mancunians because it is the common values that we all share which they seek to attack and defeat.

But I say: we will not let them.

In her conclusion, she again reached for a date. although it was a different date with special resonance for Munich.

It was the tragic massacre at the 1972 Olympics here in Munich which subsequently inspired a British Foreign Secretary, Jim Callaghan, to propose an intergovernmental group aimed at co-ordinating European counter terrorism and policing.

Conclusion To The Speech

And, then, with her final words, she issued her call to arms.

So let the message ring out loud and clear today: we will not let that happen.

So, her speech didn't rise to the occasion like a Winston Churchill speech. But this was a solid and comfortable speech from the Prime Minister.