She's not known for her flashy media management. Nor is she known for her twitter publicity. But the Prime Minister is forging a reputation for the serious set-piece speech. Her output is distinctly less than her immediate predecessor in the job, David Cameron. However, her strike rate with her speeches is possibly more impressive, so far. 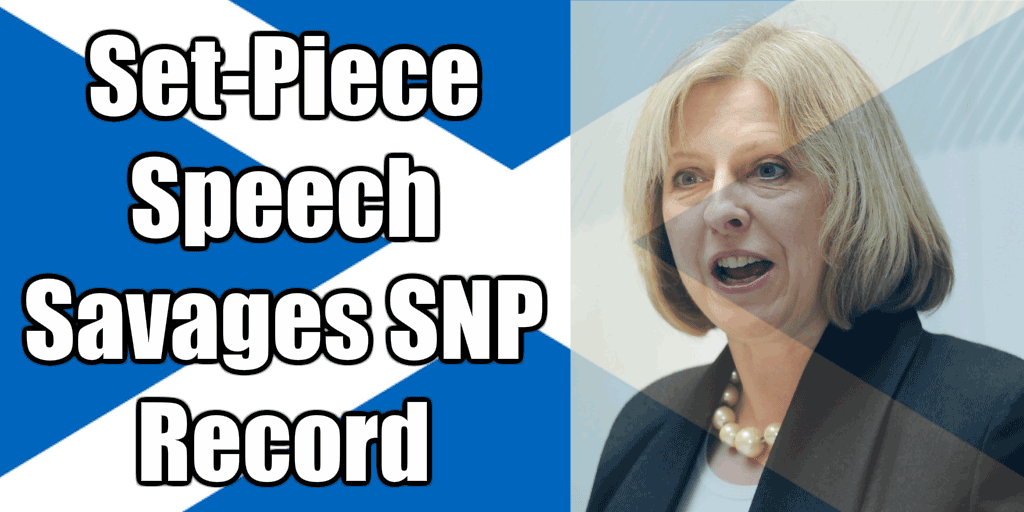 Her set-piece speech started in characteristic fashion. So we heard about the successes of the Conservative party in Scotland and due recognition for both Ruth Davidson in Edinburgh and David Mundell in Westminster. This was an important introduction, because it allowed Mrs May to seize upon the Scottish Nationalist party (SNP).

Because for too long a feeble and incompetent Scottish Labour opposition did nothing to scrutinise the SNP for their failures.

An SNP Government interested only in stoking-up endless constitutional grievance and furthering their obsession with independence, at the expense of Scottish public services like the NHS and education, was given a free pass by Labour.

The Prime Minister is not afraid of sentences in her set-piece speeches. So she's also different to her predecessor in that respect. However, she did adopt a listing strategy at times.

Education: fully devolved since 1999 and under the SNP’s stewardship for ten years.

But standards have fallen, the attainment gap remains and Scottish young people are losing out.

A cap on the number of Scottish students who can enter higher education.

Fewer young people from the poorest backgrounds making it to university than in the rest of the UK. And just this week we have learned that the SNP Government has delayed its planned education Bill, such is their obsession with the single issue of independence.

It's a technique that's possibly designed for the TV cameras and not her conference audience.

However, her speech was clear and well-structured:

And it was this very clear structure that let the Prime Minister hit all the points that she wanted to make in her set-piece speech. And, what's more it enabled her to follow a train of thought throughout her lengthy speech.

Her conclusion brought everything together as expected.

We should never forget that the people who benefit the most from solidarity across the United Kingdom are not the strong and the successful, but the poorest and the most vulnerable in our society.

We are four nations, but at heart we are one people.

That solidarity is the essence of our United Kingdom and is the surest safeguard of its future.

Let us live up to that high ideal and let us never stop making loudly and clearly, the positive optimistic and passionate case for our precious union of nations and people.

So this was one of the few set-piece speeches that the Prime Minister has given since she assumed office. However, there's plenty of proof positive that she's quite at home with the sense of occasion required for these events.

You can always join a presentation skills course to find out more about how to give a set-piece speech or speak at a conference.