Theresa May Speech Aims For Negotiation

It has to be the curse of today's Prime Minister that every one of her major speeches is about Brexit. Or so it appears. But this Theresa May speech at the Mansion House in the City of London definitely proved the rule. Because this was most certainly a Brexit speech, without waiver. 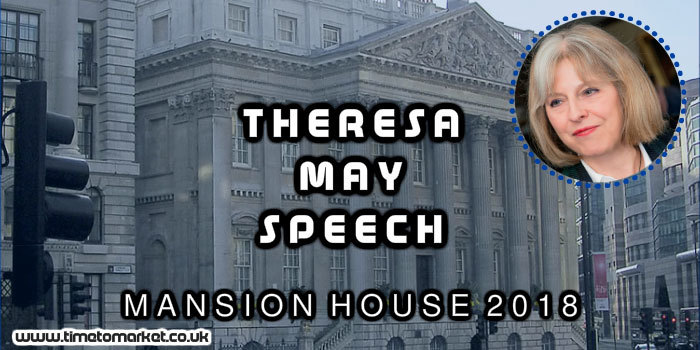 Theresa May Speech At The Mansion House 2018

This Theresa May speech was well-billed. We heard about it at least two weeks ago, and her Cabinet met to discuss their collective approach at Chequers a week previously. And, to cap it all, every one of her cabinet colleagues appears fired up to give a speech on Brexit. It's exhausting.

A Brexit Purpose For Theresa May Speech

For starters the Prime Minister had a great advantage. Because a speech at the Mansion House in the City of London provides a superb environment. As George Osborne found in his 2012 Mansion House speech. And she worked that advantage well, as her audience waited for at least 20 minutes for her speech.

Theresa May began her speech with a characteristic introduction.

Eighteen months ago I stood in Downing Street and addressed the nation for my first time as Prime Minister.

A reference to a date is a pretty standard way to start a speech and the Prime Minister is on safe ground here.

Structure To This Theresa May Speech

And this Theresa May speech stayed on safe ground with a solid structure from which to work.

That pledge, to the people of our United Kingdom is what guides me in our negotiations with the EU. And for me that means five things:

So, these five tests essentially became her structure. But she was also keen to note how the Foreign Secretary's Brexit Reconciliation speech was also a key concern.

We must bring our country back together, taking into account the views of everyone who cares about this issue, from both sides of the debate.

As Prime Minister it is my duty to represent all of our United Kingdom, England, Scotland, Wales and Northern Ireland; north and south, from coastal towns and rural villages to our great cities.

So these are the five tests for the deal that we will negotiate.

She read her one hour speech with only a few stumbles. These typically come with the challenge of both reading from a script and also maintaining eye contact. They happen.

This proved to be a serious speech with plenty of content. So, we didn't hear a great deal of rhetorical flight or fancy. That's not surprising. Because collectively we've got to the stage where some serious choices have to be made. Vision is great. But negotiation content is now king.