UKIP Conference Speech On The Gallop

There are some very big differences between the party leaders Ed Miliband and Nigel Farage. But there are also some similarities. In their conference keynote speeches last week both party leaders abandoned the lectern and appeared to speak without notes. Similar. But the UKIP conference speech was distinctly different. 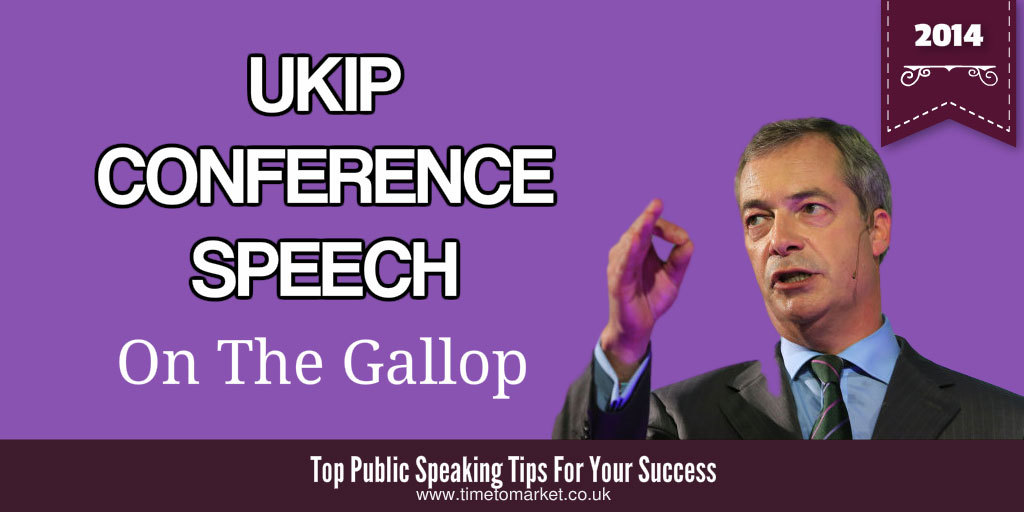 UKIP Conference Speech On The Gallop At Doncaster Racecourse

In the case of Ed Miliband his conference keynote speech went on a bit…over an hour in fact. Nigel Farage’s UKIP conference speech was considerably shorter, coming in at just over 35 minutes with all the applause. Both party leaders used wireless microphones, with Mr Farage’s microphone considerably more noticeable than that of his Labour counterpart.

Neither of the two leaders chose to use autocue. Now that was clearly a bit of a mistake for Ed Miliband as he forgot a key chunk of his rehearsed speech. The chunk dedicated to the economy.

In Mr Farage’s UKIP conference speech at Doncaster racecourse he did mention the economy, managing to score a quick laugh from his adoring audience with a reference to Ed’s speech the previous week in Manchester. And, of course, if you thought that Doncaster racecourse was an unlikely venue, then you can ponder on the equally unlikely venue for the Nigel Farage Westminster speech last year.

He achieved other laughs in his speech and he handled them with some finesse.

From the word go Mr Farage’s audience knew that they were in for a treat. His third party introduction was fulsome. There was a video compilation of his European parliament speeches and his grand entrance from the back of the conference hall set up the moment for everyone.

Structure To This UKIP Speech

Unlike Mr Miliband he did refer to his lectern notes on occasion–when the applause to his speech allowed, for example. At the end of the speech those very same notes were “liberated” by Sky journalist Gary Honeyford from the lectern. The often illegible notes revealed that this UKIP conference speech did have an intended structure.

He underlined his key points and ensured a rigorous flow to the words. But the handwritten nature of the text suggested a quickly prepared speech. Possible, but not probable. In an earlier interview with LBC radio on the day of the speech, Mr Farage had said he hadn’t got around to writing a speech. Maybe. But then sometimes all the best impromptu speeches require some preparation. There was polish in this speech.

He concluded his UKIP conference speech with a typically powerful conclusion. Then he left the conference hall the way he’d arrived…through his UKIP audience to the back of the hall. Very effective.

You can find more conference speech tips with a regular supply of public speaking tips from Time to Market. Plus, when you are ready to improve your own public speaking skills, then you’ll find that training is a really cost-effective option. Because a one-day course will set you up with the skills and confidence you need for your next conference speech. So, when the time is right, please don’t hesitate to get in touch.