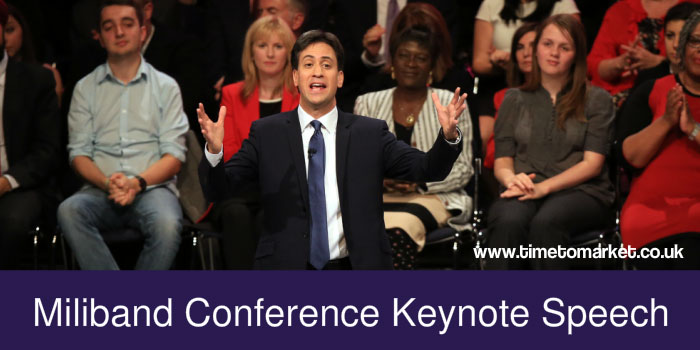 Ed Miliband’s admission that he’d forgotten a great chunk of his Labour party conference keynote speech rather unfairly re-ignited doubts over his suitability as a potential Prime Minister after the next election.

Mr Miliband’s speech was certainly billed as an extensive  summary of the political and economic landscape of the country. And with its 65 minute duration he could claim to have managed that feat pretty well. He certainly wasn’t economic with the substance. But he didn’t discuss the economy…as such. Nor did he touch on issues of immigration.

Yes, his case studies and anecdotes painted a pretty grim overview of life in modern Britain. We recognise that view. But you can be selective with your evidence in a conference keynote speech.

We spotted the lack of a serious chunk of matters economy in his conference keynote speech immediately. So it was no surprise when, in his interview with ITV’s Good Morning Britain show the following day, Mr Miliband noted that he had indeed left out more than a chunk or two from his speech:

Absolutely, yes. It’s not really about memorising the speech. What I try and do is I try and write a speech and then I use it as the basis for what I want to say to the country.
In a way, I could just stand there and read out a speech that’s been prepared earlier. I like it as a way of engaging with people. And, of course, it’s one of the perils of it that there are bits that get left out, bits that get added in. It sort of comes with the territory.

And that’s it. It’s not the first time that Ed Miliband has given a speech without notes or autocue with a backdrop of appreciative Labour supporters. Most times it works…but sometimes it doesn’t. Mr Miliband knows the risks:

I could’ve done it with Autocue, but people want someone to talk directly. I communicated a pretty effective plan for 10 years. It’s a style that works for me.

And no doubt he will continue to work with this style that he seems to enjoy. But now he knows the risks involved he might just take some cues from autocue, if nothing else.

You can discover everything you will need for your next conference speech with a public speaking course or one to one coaching from Time to Market. Why not give us a call when you are ready to find out more.