Hollywood’s big on symbolism; often using symbolism instead of accuracy. “Invictus”, the new Clint Eastwood film takes full advantage of symbolism…and stretches accuracy. The title, “Invictus” is drawn from the eponymous nineteenth century poem by William Henley. That’s a poem that Nelson Mandela had with him whilst in captivity on Robben Island. True and accurate. In the film Nelson Mandela, the truly undefeated man in the arena, gives the poem to the Springboks rugby captain, Francois Pienaar, before his World Cup Final match with New Zealand in 1995. Great symbolism. Not so accurate, however. 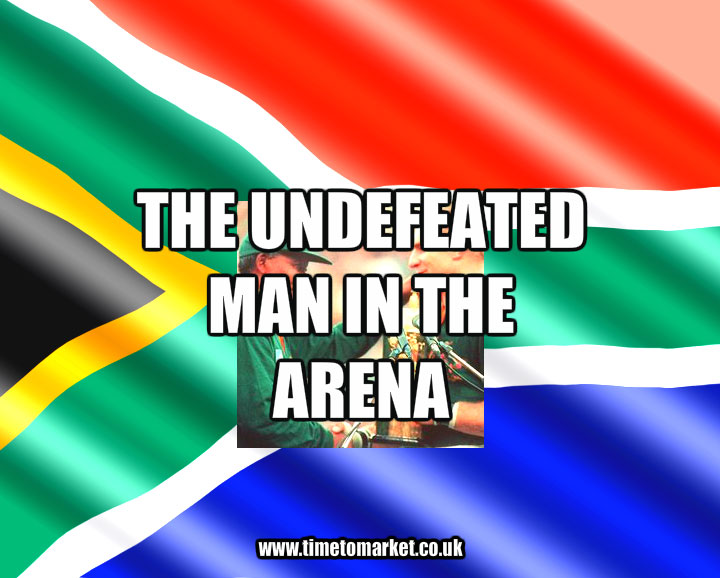 Nelson Mandela: The Undefeated Man In The Arena

In reality President Mandela gave the Springboks team some equally inspiring words. A 1910 speech by Theodore Roosevelt, “the Man in the Arena.” In essence, President Mandela chose a speech with far more relevance for the team about to face the All Blacks in the Ellis Park Stadium. A great choice of words. And an especially great choice of words for the team, the occasion and the venue.

The Man In The Arena Speech

It is not the critic who counts; not the man who points out how the strong man stumbles, or where the doer of deeds could have done them better.
The credit belongs to the man who is actually in the arena, whose face is marred by dust and sweat and blood; who strives valiantly; who errs, who comes short again and again, because there is no effort without error and shortcoming; but who does actually strive to do the deeds; who knows great enthusiasms, the great devotions; who spends himself in a worthy cause; who at the best knows in the end the triumph of high achievement, and who at the worst, if he fails, at least fails while daring greatly, so that his place shall never be with those cold and timid souls who neither know victory nor defeat.

When you need more help with your words as a public speaker don’t forget that we have a whole series of public speaking tips, podcasts and videos. There’s something for every public speaking occasion. Or, you can always opt for a public speaking coaching session. Choose either a full day or a half day of skills coaching to really get your next speech back on track. Please don’t hesitate to get in touch when the time is right.