The Birth Of A Public Speaking Legend

Today marks the anniversary of the birth of Abraham Lincoln in 1809. He was born to a poor family in Kentucky. But he rose through the political ranks very fast. He served one term as a United States Congressman and he also tried unsuccessfully as a US Senator on two occasions. He campaigned for the Presidency in 1860 on an anti-slavery platform when he vowed to cease its expansion or end it altogether. So, who could have imagined that an Abraham Lincoln speech would be celebrated today? 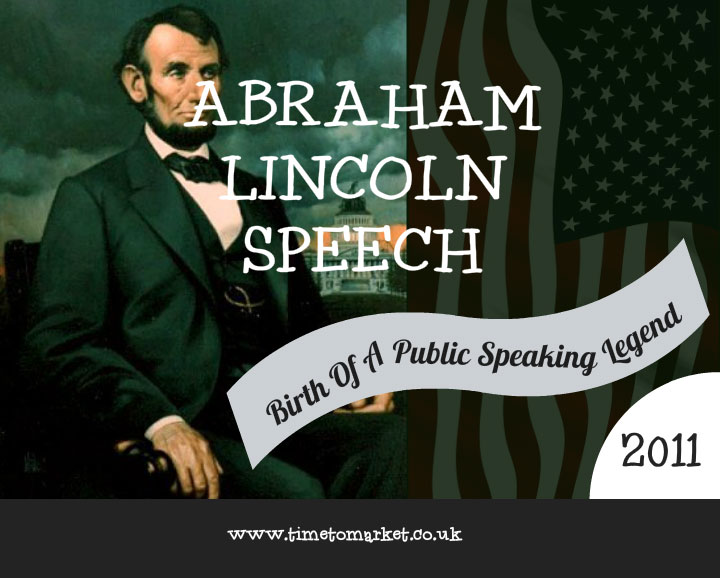 Abraham Lincoln Speech: The Birth Of A public Speaking Legend

With the Presidency won in late 1860, he then fought his stiffest test as war with the Southern slave-owning States broke out.

His 1863 Emancipation Proclamation, declared the freedom of more than 3 million slaves and preceded his steering of the 13th Amendment to the US Constitution. This abolished the ownership of slaves altogether.

The most notable Abraham Lincoln speech remains alive today with the 1863 Gettysburg Address probably the most quoted, noted and cited speech in history. If, perhaps, we don’t count Shakespeare’s “Friends, Romans, Countrymen.”

The Gettysburg Address, on November 19th 1863, came four months after the decisive battle of Gettysburg and involved the consecration of ground for the new military cemetery there. His speech was undoubtedly secondary on the running order for the day. Because at only two minutes in length, no doubt he might have thought it secondary.

There are five remaining manuscripts of the speech. Each one is different in some way. And each, in turn, differs somewhat from contemporary surviving newspaper reports.

The newspaper records were undoubtedly transcripts – perhaps from recalled memory. The era long preceded the press release or the circulation of “embargoed” speeches before the event.

Four Score and Seven Years Ago…

The speech itself began with:

Four score and seven years ago…

Referencing the Declaration of Independence it then went on to define the ongoing Civil War, not as a war between Northern States and Southern States but as a battle for new freedoms–a battle for the primacy of the United States not the individual States.

The speech ended with…

this nation, under God, shall have a new birth of
freedom; and that government of the people, by the people,
for the people, shall not perish from the earth.

An awesome achievement with only two minutes of speech, no PowerPoint and no bullet lists.