People say that public speaking inspires more anxiety and trepidation than any other business or social activity. Maybe. Because, in fact, there’s a long list of public speaking fears. However that list makes no mention of reading the wrong speech. However, the list does include: 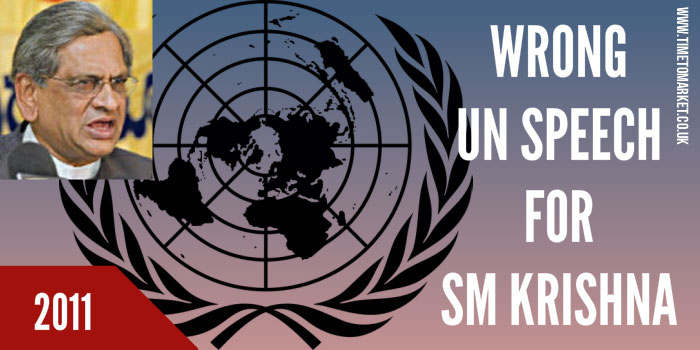 That was what happened with India’s External Affairs Minister SM Krishna when he delivered a speech at the United Nations (UN) last week.

Wrong Speech Spotted Only After A Few Minutes

SM Krishna’s speech was at the UN Security Council meeting in New York. He’d started his speech and had been speaking for a few minutes when his External Affairs team spotted that something wasn’t quite right.

At this stage of his speech, the third paragraph he noted…

On a more personal note, allow me to express my profound satisfaction regarding the happy coincidence of having two members of the Portuguese Speaking Countries, Brazil and Portugal, together here today.

It was at this moment that India’s permanent Ambassador to the United Nations intervened and stopped his speech. After a moment SM Krishna started again…with the correct speech.

It was a tricky moment for the bureaucrats at the UN. We don’t know quite how the mix-up happened. But the conventions behind speaking at the UN certainly added to the problem. Convention appears to dictate that each speech starts in a pretty similar fashion…thanking the President of the Security Council and offering near-identical references. It’s only when the speech is a few minutes old that they hit their stride! And, of course, only at that stage that any differences are self-evident.

Is there an answer to the problem at the UN? Yes, of course. Delete the diplomatic courtier nonsense and open your speech with a powerful beginning that’s original, relevant and appropriate.

But, of course, Mr Krishna’s lost speech isn’t the first occurrence. Yes, there are others. For instance President Mugabe had a problem with a lost speech that had to be fixed by a key aide, Vice-President Emmerson Mnangagwa. And, of course, in Ghana Victoria Hammah had a nightmare with her communications speech. Be careful out there!

When you want to avoid all the problems of a wrong speech, a lost speech or a poorly edited speech then you can consider a coaching session with Time to Market. Each one day session will give you the skills and assurance that you need to be effective with your next speech. Please don’t hesitate to get in contact when the time is right.