It would be uncharacteristic of Sarah Palin to miss a good speech making opportunity. And the occasion of the centenary of the birth of former President, Ronald Reagan, last week was such an opportunity for a momentous Sarah Palin speech.

But which speech would it be? Erratic or momentous?

She chose to give her speech in Santa Barbara at a gathering of the Young America’s Foundation. So far so good. 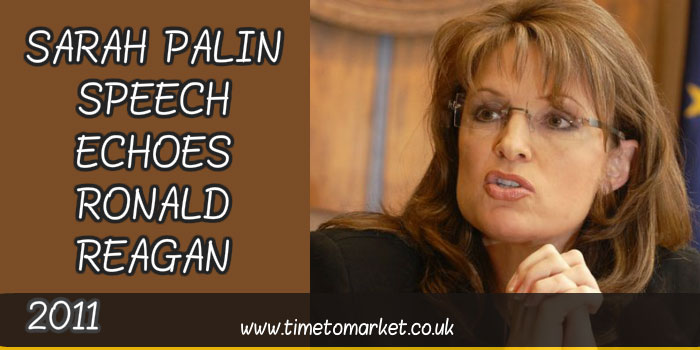 To start with, she introduced her speech with a reference to the California ranch owned by Ronald Reagan. Then she highlighted the hard work and energy of the President on his ranch as the very epitome of a Western Conservative.

This successfully allowed her to explore the values of conservatives and conservatism in general. A good technique…especially for a Sarah Palin speech.

She explored Reagan’s famous “A time for choosing” speech in 1964…a speech that gave birth to the Reagan revolution…she labelled it “a call to action“.

With the same analogy and contrast technique she showed how Reagan represented a choice between socialism and conservatism. The small government of Goldwater or the big government of LB Johnson.

Subsequently, she noted how Reagan was ridiculed at the time. Was this perhaps a fleeting reference to herself? Quite probably it was. A Sarah Palin speech poking fun at herself.

When she reads from a prepared script the future Presidential candidate is remarkably lucid (quite different to her teleprompter freeze speech) Her delivery was clear and concise. So, she paused well and placed appropriate emphasis in all the right places.

This was an electioneering speech. But it also had its comic moments…

“I’m from the government and I’m here to help.”

Explained Sarah Palin, these are the nine most dangerous words in the English language.

Her rhetorical techniques are few and far apart. Opportunities for repetition are often missed. But there was a near faultless position taker with a good sense of comic timing:

“Now where I come from, we call that bait”

Her delivery would be improved if she could master the art of delivering shorter sentences with more eye contact for her audience. She was clearly enjoying herself and in relaxed company which contributed to an easy going, if not a memorable speech.